Don Jr. Credits His Grandparents' Life Under Communism as to Why He's Conservative 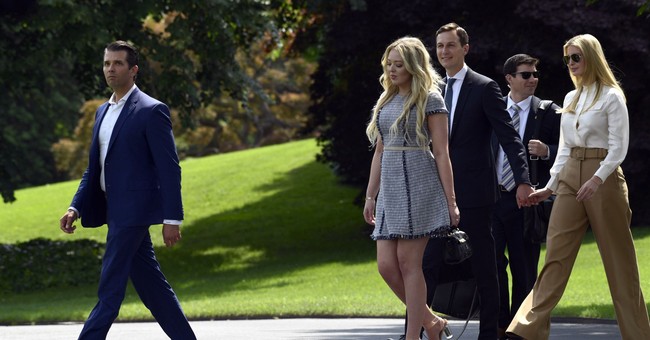 The eldest son of President Donald J. Trump, Don Jr., is currently promoting his new book, "Triggered: How the Left Thrives on Hate and Wants to Silence Us." On Tuesday, he spoke with legendary talk show host Michael Savage and discussed a key aspect of his political world view. Savage asked Don Jr. to explain why he is a conservative and how exactly his maternal grandparents' life influenced his upbringing.

"I saw you give a great speech at a fundraiser in Beverly Hills," Savage said at the start of that interview. "And in that speech, something you said stuck with me, which was your grandparents being from Czechoslovakia, being under the Soviet control and how it has shaped your worldview. Would you please tell the audience about that? It's very important they hear this."

Don Jr.'s mother, Ivana, grew up under Soviet rule in Czechoslovakia, He said that as a child, he would go back and visit his grandparents and was able to see life under communism and socialism vs. life capitalism from this experience.

"It's a big part of the book, and they sort of say, 'Hey, you know, Don how are you a conservative? You know you're the son of a billionaire from New York City, you went to an Ivy League school, all these things, you're not supposed to be, you're a hunter, fisherman, outdoorsman,'" Don Jr. explained, "My mom escaped the communist Czechoslovakia you know? My grandfather who was a blue-collar electrician from there, he came over here and he saw the incredible blessings that we were bestowed as Americans in this country in our family. And he said, 'You know this is great, but you have to see the other side.' So they were very involved in my upbringing and I spoke Czech fluently by the time I was three. In the summer I'd go over there for four to six weeks." and you know he was old school, he was an older guy."

Don Jr. then shifted to explain that when he hears politicians like Sen. Bernie Sanders suggest that life under socialism would be better for America, it only emboldens him to fight.

"And guess what I've waited in those bread lines, Michael. I can assure you they're not so glamorous," he explained, alluding t previous comments from Sen. Sanders. They're not what Bernie makes them out to be. I've seen what that system can do."

"I look at my parents' wedding picture when I was a kid, I'd be like, 'That's weird...there's my mom and there's my grandfather? Where's my grandmother? And they're telling me, 'Well, she wasn't allowed to be there because they wouldn't let her out of the country with the grandfather for fear that they would defect.' What kind of system doesn't allow you to leave? It can't be so wonderful," he continued.

"And so, when I see that socialism becoming sort of a mainstream idea on the left, you see that sort of the delta between the two sides being so great now, and much grander seen before, it just strikes me it makes me fight so hard because I've actually seen what that does. I've lived it," he said passionately.

Perhaps in an illuminating comment for listeners, Don Jr. delved into his mother's family history, and why his grandmother tells him to this day that he must fight against the rising tide of collectivism in the United States.

"And my 93-year-old grandmother who is still alive today, Michael you know this is not a -- that generations is  tougher than ours right? That wasn't a snowflake generation. This is a woman who hid in the basement of her farmhouse for two years from the Nazis during that occupation. Then had the Communists come in, and she tells me, I mean she calls me because they only have CNN over there that's all -- she calls me and says, You must do something about. This you must fight you cannot let the,' I mean this was an old woman who has been through a lot who is  in tears because she fears for me her grandchildren and her great-grand children. I fear for you and your grandchildren."

As Julio and Matt covered, Don Jr. appeared on "The View" on Thursday for a fiery interview. The interview with Savage shows readers a different side of the president's son that most will not see.