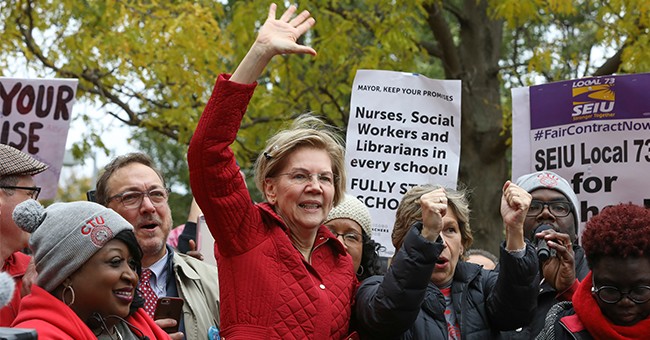 Senator Elizabeth Warren of Massachusetts sat down with New Hampshire Public Radio on Wednesday for a lengthy discussion of her many different "plans." All her proposed solutions to our nation's problems end in more taxation, bigger government, and less freedom. Radio host Laura Knoy asked Warren what, if any, limits Sen. Warren's proposed plan to eliminate college student debt would have. In short, the Massachusetts Senator told the Granite State that if you're a college graduate earning $250,000 or more, sorry pal, you will not have your debt cancelled. And if you are very rich, you will more or less be punished for being successful by paying off the debt of everybody who earns less than you.

"This is for people who have less income than that -- It covers all student loans. So the typically federal insured student loans, the parent plus loans, if you have a private student loan, you're permitted to convert it to a public student loan and then do the student loan forgiveness, so that we get the maximum relief," she added.

When asked, "What incentives do colleges have to reduce cost if everybody's debt is paid off," Warren told the host that this will be managed by the second part of her larger wealth tax.

"A second part on the same two cents, because we're paying for this out of the two cent wealth tax, uh, is to provide tuition free technical school two-year college and four-year college. But there are some strings on this, and that is about colleges keeping costs under control," Warren continued.

"So the federal government picks up the tuition part that goes to the students, but in return the college, or the state has to do, maintenance of effort -- that is putting that same money into UNH and the other state schools, and the college has to keep those costs under control because they cant just ratchet up tuition rates. So in effect, let's think of it this way, let's reverse what you just asked me," she declared. "Think of it as, with those two cents, we're gonna invest in our babies, in our public schools...and we're gonna invest in post high school education. But, we're also going to deal with the hangover debt from student loans for people who have gone to school in the last 10 or some years, or 15 or 20."

Sen. Warren also said her student relief plan would be used to eliminate the racial wealth gap. When asked if she would cut spending, she said yes in areas such as defense, but ultimately her plan is dependent on taxing the uber wealthy. It is unclear what happens after those super wealthy stop earning as much money due to taxation. (Hint: the problem with socialism is eventually you always run out of other people's money)

The full interview can be seen here: