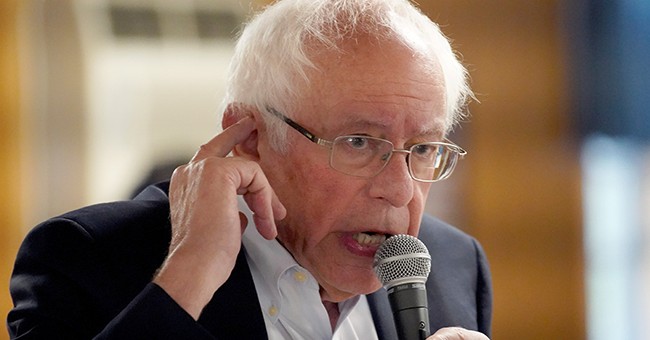 Vermont Democratic Socialist Bernie Sanders has long been against open borders. He, much like President Trump, often argues in the Senate that an endless stream of illegal immigrants harms American workers. Many unions, typically left leaning, also support this idea -- because it is true. Early in the campaign trail, Sanders even rebuked a supporter who prefaced his question by insinuating that Sanders supported open borders. Sanders responded, "I'm afraid you may be getting your information wrong. That's not my view." He also added, "What we need is comprehensive immigration reform," Sanders added. "If you open the borders, my God, there's a lot of poverty in this world, and you're going to have people from all over the world. And I don't think that's something that we can do at this point. Can't do it. So that is not my position."

Sen. Bernie Sanders campaigns in Oskaloosa, IA: "If you open the borders, there's a lot of poverty in this world, and you're going to have people from all over the world. And I don't think that's something that we can do at this point. Can't do it." pic.twitter.com/INF9GopzIe

But, as Beth covered, this past weekend Sen. Sanders quietly shifted his stance to a more, well, open policy of allowing illegal immigrants stay in the country. He also has advocated for providing free healthcare, free college, and more for illegals. While he may not have directly said, "I'm for open borders," he did say we should end deportations of those here in the country and advocated the aforementioned public benefits.

"We are going to end the ICE raids that are terrorizing communities all across this country," Sanders said. "We are going to impose a moratorium on deportations. And we are going to, as I mentioned — and there are some things that a president can do with executive orders and some things you can’t."

"I am, as some of you know, supportive of a Medicare for All single-payer system and that means that everybody in the country has health care including the undocumented. And mark my words. You’ll see 30-second ads attacking me for that,” Sanders explained.

"And then you’ll see another set of 30-second ads because when I say I want to make public colleges and universities tuition-free, that also includes the undocumented," Sanders said. "Now I hope that as soon as possible the undocumented will not be undocumented. That’s the goal."

As Annie Guyer of CNN reported, a senior Sanders campaign policy advisor confirmed "this is new."

Indeed, it seems Sanders is caving to the progressive mob on arguably his most favorable stance from a conservative perspective. It is new for Sanders, and it is bad for America. It's going to be a disaster for everybody if the Democratic Party contains no prominent politicians who are against open borders.