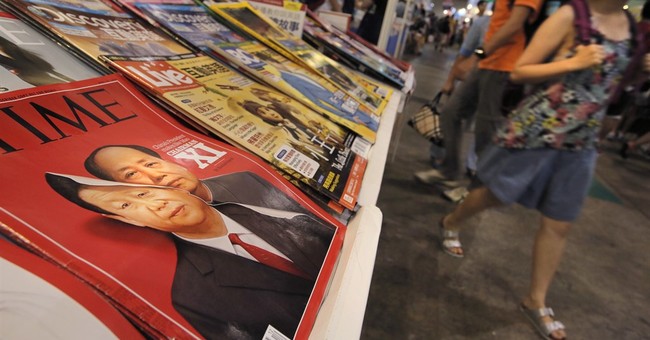 TIME magazine, the self-appointed arbiter of truth and goodness, wants you to know that the science is settled on climate change (formerly known as global warming until a few predictions by Al Gore didn't pan out). In an upcoming issue that is dramatically titled, 2050: The Fight For Earth, leftists at the imprint sound the alarms that time is running out for our planet. But, as Editor-in-Chief and CEO of TIME Edward Felsenthal brags, the publication does not include any opposing viewpoints. That means you will find no stories whatsoever that disagree with climate change in their latest issue.

Here's why Felsenthal says that climate change skeptics are not included:

Notably, what you will not find in this issue are climate-change skeptics. Core to our mission is bringing together diverse perspectives. Experts can and should debate the best route to mitigating the effects of climate change, but there is no serious doubt that those effects are real. We are witnessing them right in front of us. The science on global warming is settled. There isn’t another side, and there isn’t another moment.

Well, if TIME will not publish climate change skeptics, Townhall will. In a column from June 2019, Vijay Jayaraj explains why the "endless failure of climate doomsday tales" should be taken "with a pinch of salt."

On June 29, 2017, the Dailymail in UK ran an article headlined “Four years to save the Earth: 2020 is the deadline to avert climate catastrophe, experts claim in chilling commentary.”

Two years later and halfway to deadline, the earth has not changed much. If anything, the El Niño of the 2016-17 season gave way for much cooler temperatures across the globe and the past two years have been colder than 2016.

This is just one of the many climate doomsday news articles that gets published in our mainstream news media every single day.

How seriously should we treat the climate doomsday claims?

Jayaraj goes on to detail several failed predictions of melting ice caps and increased tornadoes that never happened. Jayaraj notes that climate change articles, arguably like the ones found in TIME, should be met with judgement. Why? "Neither are they scientifically accurate nor are they put through rigorous scrutiny before being disseminated to the masses.