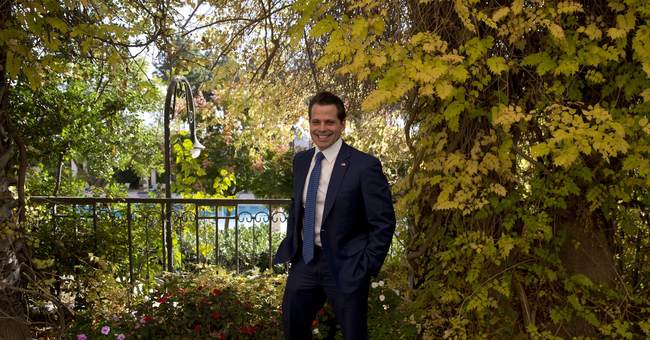 It's no secret that President Donald J. Trump's ex-White House communications director Anthony Scaramucci now hates the president...or at least says he does so that CNN will show him some love with TV screentime. But, if he doesn't support President Trump in 2020, then who will he vote for? According to the Washington Examiner, he's been checking out former Vice President Joe Biden. "The Mooch" appeared at one of Biden's swanky campaign stops in the Hamptons.

Kerry Picket reports that Scaramucci told the Washington Examiner, "I'm a registered Republican. I haven't switched my support to Vice President Biden, but I will be working to find a nominee to challenge Donald Trump because he's lost his mind and we've got to get someone here before we lose the election 2020."

Biden addressed supporters at the Blue Dream Gala, hosted by the Greek Orthodox Church of the Hamptons over the weekend. Despite numerous gaffes and verbal miscues, Biden is still the front-runner in the 2020 presidential primary race.

On August 19, Scaramucci announced his efforts to defeat his old boss in the next election in a Washington Post op-ed.

"This isn’t a Road to Damascus moment; my concerns have been building publicly for a while. And I’m not seeking absolution. I just want to be part of the solution," he wrote. "The negatives of Trump’s demagoguery now clearly outweigh the positives of his leadership, and it is imperative that Americans unite to prevent him from serving another four years in office."

Since then, he's been slinking around various political circles trying to find his candidate. Conservatives can only hope The Mooch and the Democratic Parrty coalesce around Biden. He's the walking human lapsus linguae.