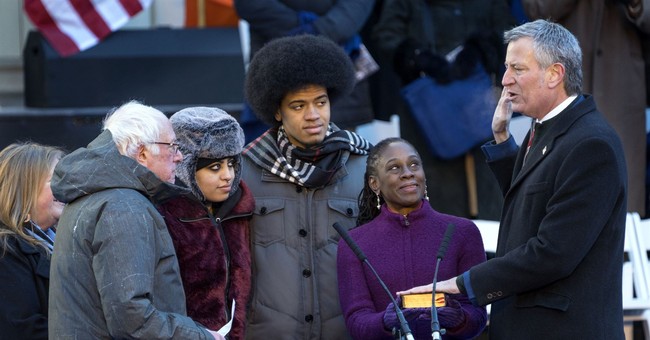 New York City Mayor and 2020 Democratic presidential candidate Bill de Blasio just made it easier for illegal immigrants to obtain taxpayer-subsidized apartments. His administration changed the city's affordable housing lottery by doing away with the requirement that any adult applying for "affordable housing" -- aka cheaper apartments paid in for in part by city taxes in typically hard to get neighborhoods -- must have a Social  Security Number or Tax Identification Number in order to be considered for the draw. In New York, residents apply for the lottery several times throughout the year. But critics of the old system said that it harmed minority residents who may be more likely to have little to no credit. The SSN and TIN made it possible to check their credit history, thus potentially eliminating them as worthy applicants. But now that these pieces of personal information are no longer required, illegal aliens will be able to enter the lottery as there will be little to no way of checking if they are United States citizens.

"It completely opens the floodgates," Ana Nunez, of Churches United For Fair Housing, a nonprofit organization, told New York One.

Nunez also added that illegal immigrants "confide in me. They don't have a social security number or a TIN...They may fear that if they apply especially with this administration they might face some repercussion … so that is now a huge barrier that has been eliminated."

"So now this is a truly, truly a sanctuary city," she added.

According to NY1, "New Yorkers entered the city's affordable housing lotteries 4,654,603 times last year. Only 7,857 'won' the right to an apartment with below-market rent."

But Howard Husock of the Manhattan Institute argued this will only exacerbate developers' angst by taking away the credit requirement check. Husock says the only purpose for that is to make sure renters will pay their bills on time.

"They want to make sure the tenants they do get are able to pay the bills, so we want them to have the assurance of a good credit score, and by taking that off the table, we will discourage developers from participating in the mayor's signature housing program," Husock told the media.

Not only does this discourage developers, but it also is a slap in the face to hard-working, legal New Yorkers.

Dennis Saffran, a Queens attorney and former General Counsel of the NYS Division of Housing, told Townhall, "It's outrageous for Bill de Blasio to leapfrog illegal immigrants and those who can't pass a credit check over thousands of low-income New Yorkers on the waiting list for affordable housing."

But, Bitta Mostofi, Commissioner for the Mayor’s Office of Immigrant Affairs, defended the decision saying, "These new changes are a step towards promoting greater racial equity in our housing market and greater access to affordable housing, regardless of immigration status."

"By eliminating requirements that unnecessarily and disproportionately impact working class immigrant families and people of color, HPD continues to show our City’s commitment to racial and immigrant justice," Mostofi added.

Last year's odds of winning the affordable housing lottery was 1 in 600. These odds will only increase with New York's estimated 477,000 illegal immigrants being added to the mix.