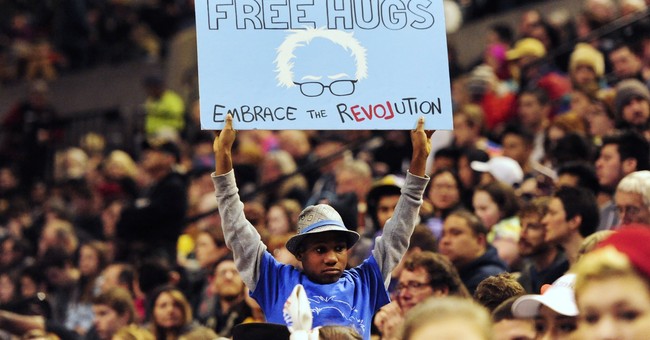 Despite not voting for the Green New Deal in the senate this past winter, Vermont Democratic Socialist presidential candidate Bernie Sanders introduced a Green New Deal of his own on Thursday as part of his 2020 campaign platform. The price tag for the global warming defeating -racial injustice combatting - pro-socialism on steroids catch-all bill is a whopping 16 trillion dollars and zero cents.

As noted by the New York Times, the proposed bill by Sanders would declare "climate change a national emergency; envisions building new solar, wind and geothermal power sources across the country; and commits $200 billion to help poor nations cope with climate change." Sanders also promised it would eliminate unemployment completely by creating 20 million jobs over a 15 year period. It also calls for the U.S. to completely ditch fossil fuels by 2050.

Gizmodo's Brian Kahn breaks down some of the plan's specifics:

Among the outlays, Sanders would commit $2.37 trillion to renewable energy and storage, which the plan says would be enough of an investment to meet the country’s energy needs. Any renewable energy the government generates would be publicly owned, and a Sanders administration would prioritize selling it to publicly owned utilities and cooperatives at current rates to keep costs down. The campaign estimates that alone would raise $6.4 trillion of the $16.3 trillion needed to fund the transition. The plan highlights this under a bullet point about needing to “end greed in our energy system.”

To that end, the plan also says Sanders would instruct the Department of Justice (DOJ) to go after fossil fuel companies for both civil and criminal penalties. So far, cases winding through the state court systems have largely failed to hold Big Oil accountable for lying to everyone from the public to shareholders.

As for how America will pay for it, Sanders' website says the revenue will come from "making the fossil fuel industry pay for their pollution, through litigation, fees, and taxes, and eliminating federal fossil fuel subsidies." It will also be paid for by "making the wealthy and large corporations pay their fair share" and "scaling back military spending on maintaining global oil dependence." There were several other methods, including cutting the safety net.

As Ben Shapiro sarcastically said, "I want to live in a world with as much money available as Bernie Sanders believes is available. Because that sounds awesome."

I want to live in a world with as much money available as Bernie Sanders believes is available. Because that sounds awesome.https://t.co/9uXe9G98q9