Pervert Alert: Jeffrey Epstein Had A Weird Painting Of Bill Clinton In A Blue Dress And Red Heels? 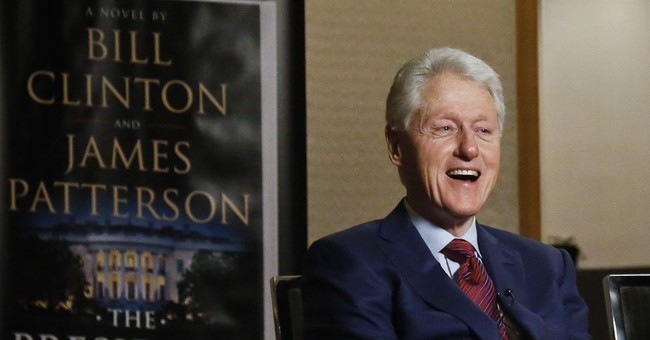 Jeffrey Epstein, needless to say, is a weird dude. He's a strange, perverted, evil guy who is now dead as a doornail and most likely rotting in Hell.  But, if this latest report is actually true then Epstein's proclivities are even odder than we ever imagined. Apparently, the now-deceased 66-year-old convicted child sex offender and accused sex-trafficker had a strange portrait in his ultraluxurious Manhattan house of former President Bill Clinton sitting promiscuously in a blue dress and red heels.

The Daily Mail first reported that a photograph of the painting was taken by a woman who was attending a business meeting with Epstein inside his home. She was meeting with him to potentially gain the mysterious billionaire's financial backing for an unspecified project. A door leading to some sort of office was ajar, exposing the painting. Her business partner then snapped the photo of Slick Willy, she claims. The British paper used metadata to confirm the picture was actually taken inside Epstein's New York mansion.

The @DailyMail verified with metadata that this portrait of Bill Clinton in heels and a blue dress while sitting in the Oval Office was hung in Jeffrey Epstein’s Manhattan home... Thoughts?

Here's a full resolution of the picture. As Boston's arguably greatest conservative Howie Carr says, "WARNING: This can't be unseen!"

The Daily Mail's source said while she waiting for Epstein, there was also a girl who looked to be about 14-years-old in the same waiting area. Overall, the businesswoman had a very eerie and creepy feeling about the entire place. The picture only increased this uneasiness.

"It was absolutely Bill Clinton. It was shocking - it was definitely a painting of him. It was a very provocative, sexual picture. He was wearing heels, a blue dress and his hand was in a weird position," she told the paper.

The blue dress looks very similar to the one that Bill's wife and two-time failed presidential candidate Hillary Clinton wore in 2009 at the Kennedy Center Honors. The color is also associated with the infamous blue dress that Monica Lewinsky had on when the then-president had sexual relations with her.

It is unclear whether or not this image was the original painting or a print, but the Daily Mail has the scoop on its likely origins:

The original painting is called 'Parsing Bill' and is by Australian-American artist Petrina Ryan-Kleid, although it is unclear if Epstein had bought the canvas or had a print mounted. Ryan-Kleid exhibited for her degree show when she graduated with an MFA in 2012 from the New York Academy of Art.

Clinton's and Epstein's relationship is sordid at best. The former president claims he has only been on four trips with the sex offender, but an in-depth look into flight logs says that Clinton may have flown as many as 27 times or more with Epstein, oftentimes to his private island where he supposedly trafficked underage girls.