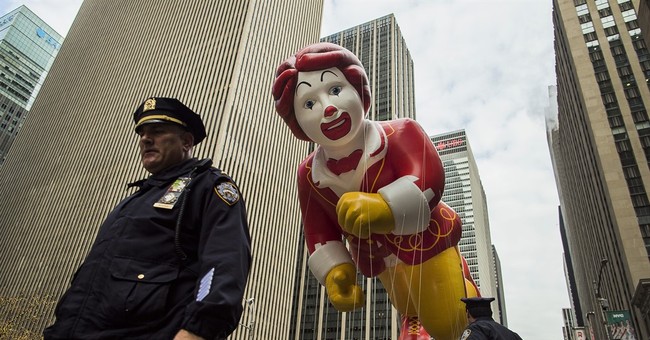 McDonald's, the company responsible for providing Americans with thousands of pounds of salt, sugar, and fat each year, recently tried to improve its products for a healthier, happier planet. But no, they weren't worried about what their Big Macs were made of, rather they took an interest in their plastic straws. After pressure from leftist groups to ditch the straws, which environmentalists say cause irreparable harm to Earth, the burger chain decided to switch to paper. But, there are a couple of problems with the paper straws. 1) They turn to mush if you don't drink your beverage fast enough. And 2) unlike the plastic straws McDonald's used to have, these ones aren't even recyclable which means they have to go in a landfill:

The straws were introduced to all 1,361 McDonald's restaurants in the United Kingdom and Ireland after a trial last year.

But the fast food giant acknowledged on Monday that the new versions are too thick to be processed by its recyclers.

"While the materials are recyclable, their current thickness makes it difficult for them to be processed by our waste solution providers, who also help us recycle our paper cups," a McDonald's spokesman told the UK's Press Association news agency.

Isn't this how it always goes? Leftists push companies and individuals to change their ways for global warming or climate change or extreme weather or whatever they call it these days. Then, new evidence comes out that the "new and improved way" is actually worse for the planet than previously thought.

So perhaps rather than kowtow to the far-left who make up the green movement's rank and file, these companies should do more research before they make decisions rather than have knee-jerk reactions.

Maybe McDonald's should have taken a page from the Trump campaign's playbook. They've sold hundreds of thousands of reusable and recyclable plastic straws as a way to stick it the tyranny of "liberal paper straws." I guess the Trump campaign is more environmentally friendly than McDonald's.

P.S.: Won't a group of a tree huggers start complaining that paper straws kill trees and we should actually be using straws made out of rocks or something? Nonetheless, here's a great chance for me to use one of my favorite videos from YouTube: