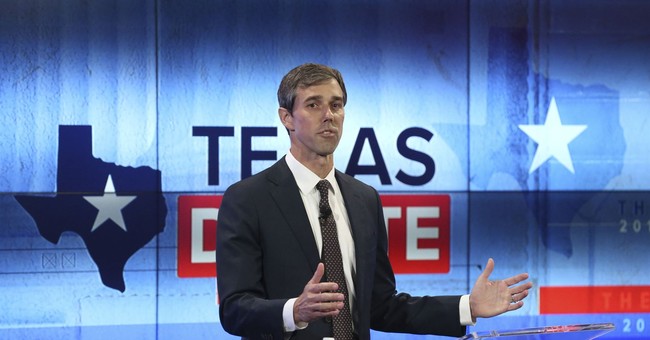 Robert Francis O'Rourke recently reminded America he was running for president by telling a group of immigrants and new citizens that the country they just decided to pledge allegiance to was founded on white supremacy and is so entrenched in racism that to this day "every single institution and structure" is meant to keep minorities enslaved.

“This country was founded on white supremacy and every single institution and structure that we have in this country still reflects the legacy of slavery and segregation and Jim Crow and suppression even in our democracy," the former Texas congressman told the group in Nashville, Tennesee.

Democrat presidential candidate Beto O’Rourke: “This country was founded on white supremacy and every single institution and structure that we have in this country still reflects the legacy of slavery and segregation and Jim Crow and suppression even in our democracy” pic.twitter.com/84RqYqu6i0

If this were true, it is unclear why O'Rourke would welcome these individuals and more in the U.S. Perhaps he is simply trying to rally his progressive base, which seems to increasingly believe that America is indeed an evil nation and one that needs to be destroyed, lest we want the proliferation of racism to continue.

This talking point is not necessarily anything new. In fact, it is a little predictable, as Harmeet Dillon noted on Twitter.

"White liberal guilt is so boring. And embarrassing to watch. Listen people: immigrants come here because they want that amazing American life that you are trashing and describing as horrible. It's way better here than whatever place we came from. Don't you get it? 'Murica," Dillon said.

White liberal guilt is so boring. And embarrassing to watch. Listen people: immigrants come here because they want that amazing American life that you are trashing and describing as horrible. It's way better here than whatever place we came from. Don't you get it? 'Murica ???????????? https://t.co/8W74U9WThZ

Indeed, maybe O'Rourke is simply projecting his own inner guilt of stealing his self-given nickname of "Beto" from Hispanics in order to pander to non-white voters. Or maybe, Beto is feeling guilty after years and years of trying to bulldoze Hispanic immigrants' homes in order to secure a few blocks for condominiums for his father-in-law.

Beto, Bobby, O'Rourke, whatever you want to call him, was the chief architect of a plan to destroy "El Segundo Barrio" in El Paso. As reported at the time in 2007, "hundreds of residents will be forced out of their homes. Businesses will be relocated. And the Segundo Barrio and surrounding neighborhoods gradually will be erased-'de-Mexicanized,' some call it-and replaced with an arena, parking garages, condos, lofts, town homes, a 'lifestyle retail' district, a “mixed-use” zone, a 'mercado,' and an 'urban retail' outlet rumored to be a Wal-Mart or Target."

O'Rourke's father-in-law, Billy Sanders, would have been the chief architect of the new structures and reap millions in profit. According to The Texas Observer, Beto saw no problem with this fact:

"O’Rourke, meanwhile, has participated in several key council votes, including the critical decision last fall to incorporate the redevelopment project into the city’s comprehensive plan. O’Rourke, who is running for reelection, adamantly denies any conflict of interest despite the fact that his wife, his mother, his father-in-law, and even O’Rourke himself were at one time all members of the PDNG. 'My relationship with Bill does not present a conflict, as he cannot profit from this plan, nor can I, nor can any member of my family,' O’Rourke wrote in an e-mail."

The plan gained support from mostly white residents, including one blogger who wrote at the time, "The status quo losers that live in Segundo are up in f*cking arms because their hood is going to go from old and busted to new hotness. Maybe a little kick in the nuts of motivation in the form of tearing their sh*tholes down will get them to do something with their lives."

But, those who opposed the plan called Beto a "'little puto,' a 'punk-a** b*ch,' a liar, a thief, and a sellout" while his father-in-law and his cronies were described as "neo-conquistadors."

The full plan never happened, but not for lack of trying. In this video, an exasperated Beto is seen trying to convince Hispanic immigrants that, actually, it is good when white men in big government and big business come in and bulldoze your homes and destroy your livelihood.

Hopefully, just as the El Segundo Barrio immigrants called out Beto for his bullcrap a decade ago, the Nashville group of new immigrants will do the same for his false beliefs of the country. Whatever the case, American voters should not take lessons on racism too seriously from a man who co-opted a Spanish sounding nickname for votes and then abused his power in an attempt to drive the very same Hispanics off their land for his white father-in-law and investors.