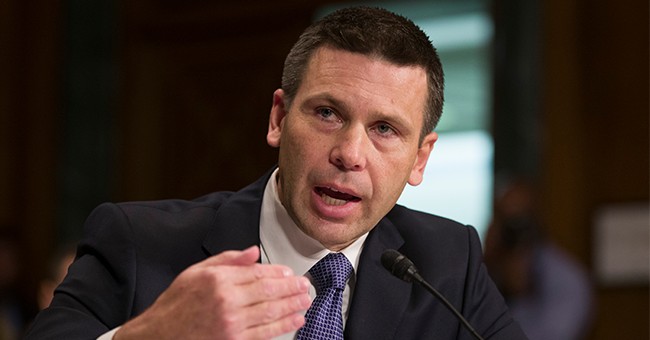 One would think that if you are fleeing oppression into the opening arms of a generous country, then you would at least show up for a court hearing demanded by that country to prove that you and your family actually need a safe-haven from violence. However, the new head of the Department of Homeland Security testified yesterday that data shows 90% of all recent asylum seekers ordered to prove their status did not show up for their court ordered immigration hearing.

Yesterday on Capitol Hill, Acting Secretary Kevin McAleenan testified that thousands of immigrant family units did not appear when asked to do so in recent months. Sen. Lindsey Graham posed the question of how many illegal aliens bail on their hearings. Fox News has the interaction:

“It depends on demographic, the court, but we see too many cases where people are not showing up,” he said, telling Graham that DHS recently conducted a pilot program with family units.

“Correct, that is a recent sample from families crossing the border,” McAleenan clarified.

McAleenan also said that the feds. cannot properly vet the immigrants because of laws preventing them to do so.

"Currently due to a single district court order, we cannot obtain effective immigration enforcement results for the families arriving at our border -- they cannot be held for longer than 21 days and do not receive rulings from immigration courts for years,” McAleenan.

As part of the new agreement between the United States and Mexico signed by both countries last week, Mexico has agreed to hold more asylum seekers rather than these individuals being held in the United States as their application process goes through America's court system.