Democrats Hoping Hicks Will Give Them Something, Anything At All To Bring Down Trump In Next Week's Expected Testimony 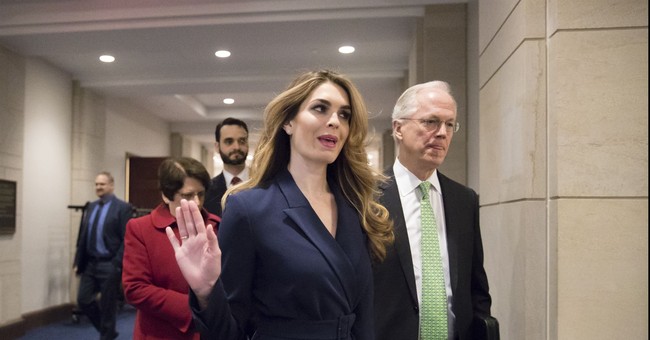 Though it is unlikely that former senior White House aide Hope Hicks will give Congress some piece of information that could bring down her former boss, President Donald J. Trump, the Washington Post reports that she "has agreed to testify before the House Judiciary Committee next Wednesday, according to people familiar with the matter."

As noted by Josh Dawsey and Rosalind Helderman, Hicks will be the first former official in Trump's White House to speak before the House Judiciary Committee which is still investigating whatever connection President Trump had to Russian interference in the 2016 election. The questions for Hicks, however, are supposedly going to focus on whether or not the commander-in-chief obstructed justice, not the alleged collusion with a foreign adversary to rig a presidential election.

This meeting could be a colossal waste of time as Hick's could simply refuse to comment, "citing the president’s assertion of executive privilege on events that occurred inside the White House."

This report comes after Donald Trump Jr. appeared today before the Senate Intelligence Committee to discuss his role and other topics regarding the Russian investigation probe. While the Senate Intelligence Committee is headed by Republicans and could arguably be seen as more bipartisan, the House Judiciary Committee is led by Democrats who are yearning to find anything they can to even potentially move forward with the impeachment of President Trump.

As reported by WaPo, "Hicks was one of five aides formally subpoenaed by the committee — which is probing the obstruction question, among other issues. Mueller’s report said there was insufficient evidence to show a conspiracy between Russia and any Trump associates and decided not to reach a conclusion about whether the president committed obstruction, based on long-standing Department of Justice policy."

Hicks, who at first refused testify before the committee, has long been about fantasized by l Democrats who dream of taking down  Trump. With headlines like Vanity Fair's Could Hope Hicks Be The One To Bring Down Trump?, leftists have been ogling the former aide as the antidote to their Trump Derangement Syndrome and wishing her testimony would justify their concerns about him and provide the legal base for impeachment.