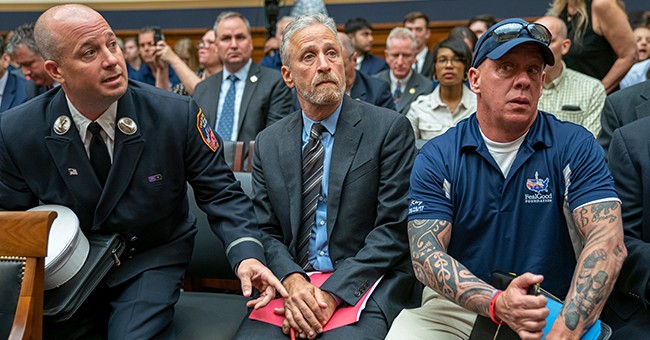 Celebrity Jon Stewart, amongst others, testified before Congress today on behalf of 9/11 first responders and survivors to discuss the status of the expiring 9/11 Victim Compensation Fund. The fund, which assists these heroes with various medical-related expenses for illnesses and injuries caused by the horrendous terrorist attack, is quickly running out of money due to an increase of medical need amongst those who sacrificed on 9/11. The fund will officially end in 2020, but bipartisan legislation has been introduced in order to renew the Victim Compensation Fund. First, today, the House Judiciary Committee is listening to testimony from those affected either personally or within their community today.

Stewart, a New York native and former host of Comedy Central's The Jon Stewart Show, has long advocated on behalf of 9/11 victims. The comedian's remarks today started off saying, "I want to thank Mr. Collins and Mr. Nadler for putting this together, but as I sit here today I can't help but think what an incredible metaphor this room is for the entire process of getting healthcare and benefits for 9/11 first responders has come to. Behind me, a filled room of 9/11 first responders, and in front of me a nearly empty congress."

Stewart became justifiably emotional, saying "I am tired of hearing that it is a 9/11 New York issue. Al-Qaeda didn't shout 'Death to Tribecca.' They attacked America, and these men and women and their response to it is what brought our country back...It's what gave a reeling nation a solid foundation stand back upon, to remind us why this country is great, why this country is worth fighting for, and you are ignoring them. You can end it tomorrow. Why this bill isn't unanimous consent...is beyond my comprehension. "

Jon Stewart testifies for September 11 Victim Compensation Fund: "Accountability doesn’t appear to be something that occurs in this chamber…I'm sorry if I sound angry and undiplomatic, but I am angry, and you should be too." pic.twitter.com/njxJzSmzSJ

A teary-eyed and righteously angered Stewart received loud applause from the room at the end of his remarks.

"Less than 24 hours from now, I will be starting my 69th round of chemotherapy. Yeah, you heard that correct. I should not be here with you. But you made me come. You made me come because I will not stand by and watch as my friends with cancer from 9/11 like me are valued less than anybody else, because when they get sick, they die," he continued.

"You all said you'd never forget. Well, I'm here to make sure you don't," he said while imploring Congress to extend the fund. His remarks earned him a standing ovation from those viewing the testimony.

The new extension bill is sponsored by Rep. Jerry Nadler (D-NY) and Rep. Doug Collins (R-GA) among others from both parties. The vote in Congress for a permanent reauthorization will occur Wednesday of this week, according to Nadler.

House Judiciary Comm hearing on 9/11 Victim Compensation Fund is underway. Comedian and 9/11 advocate Jon Stewart is among the witnesses. VCF is running dry because of a surge of illnesses. Bill would restore funding to help responders and survivors. @wcbs880 #NeverForget pic.twitter.com/AxSSfFX95s

In his prepared opening remarks, Rep. Nadler noted that "[t]he attacks created an environmental nightmare when the Twin Towers collapsed in lower Manhattan. Hundreds of tons of contaminants poured onto the streets and covered first responders, residents, office workers, and students in a cloud of toxic dust."

Nadler continues, saying the federal government at the time did not properly clean the area in the weeks and months following the attack, and told New York City residents various "lies" that led them to believe the area was safe. It was not actually safe, and as a result, thousands of people have suffered the consequences.

Today, Nadler said while "it can be frustrating watching a body as large as the U.S. Congress work its will, when we do act, we can bring tremendous resources and the strength of the entire federal government to bear on a problem and can improve the lives of so many."

"It is my hope, and my sincere wish, that Congress will act swiftly to stop these devastating cuts, to extend this program, and to provide as much peace of mind as we possibly can to those who continue to suffer from the 9/11 attacks. We will never forget," he concluded.

Rep. Peter King of New York echoed these claims in his testimony noting that he, alongside first responders and New York authorities, went through six months of wake and funerals immediately following 9/11 and now "those wakes and funerals have started again" due to the ramifications of illnesses. Rep. King noted this was truly a "national issue" and urged Congress to approve the permanent authorization of the bill.

The funding will most likely pass in Congress tomorrow before heading to the Senate.