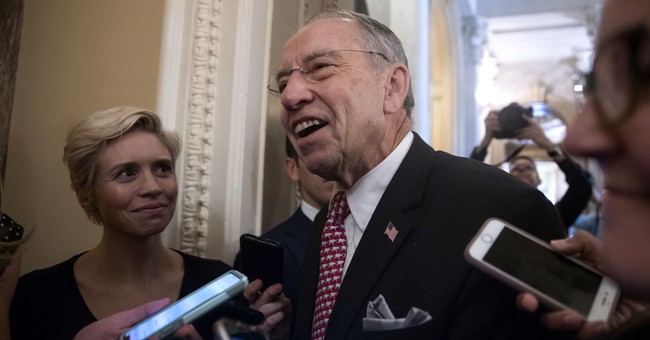 Several GOP Senators have warned President Donald J. Trump that any new tariffs imposed upon Mexico in an effort to combat illegal immigration and stop the flow of illicit drugs into the could country would "stifle" any potential North American Free Trade Agreement replacement deal.

Sen. Joni Ernst (R-IA) told media on Friday that, "The [U.S.-Mexico-Canada Agreement] would provide much-needed certainty to our agriculture community, at a time when they need it...If the president goes through with this, I’m afraid progress to get this trade agreement across the finish line will be stifled."

Sen. Ernst's comments, along with a handful of other senators', come after the president tweeted last night that he may impose tariffs upon Mexico if they do not do more to stop illegal aliens and l narcotics coming through the southern border.

"Mexico has taken advantage of the United States for decades. Because of the Dems, our Immigration Laws are BAD. Mexico makes a FORTUNE from the U.S., have for decades, they can easily fix this problem. Time for them to finally do what must be done!," the President tweeted.

"In order not to pay Tariffs, if they start rising, companies will leave Mexico, which has taken 30% of our Auto Industry, and come back home to the USA," he continued via Twitter. "Mexico must take back their country from the drug lords and cartels. The Tariff is about stopping drugs as well as illegals!"

The president noted that "80,000 people died last year" due mostly to the number of drugs coming through Mexico.

90% of the Drugs coming into the United States come through Mexico & our Southern Border. 80,000 people died last year, 1,000,000 people ruined. This has gone on for many years & nothing has been done about it. We have a 100 Billion Dollar Trade Deficit with Mexico. It’s time!

"Trade policy and border security are separate issues," Grassley said. "This is a misuse of presidential tariff authority and counter to congressional intent. Following through on this threat would seriously jeopardize passage of USMCA, a central campaign pledge of President Trump’s and what could be a big victory for the country.

However, according to Politico, the White House officials believe the act falls under the authority of the International Emergency Economic Powers Act. "There’s case law that supports the action taken by the president," press secretary Sarah Huckabee Sanders said defending President Trump. "And frankly, if other people were stepping up and doing more the president wouldn't have to continue to look for ways to stop this problem on his own.

"I can personally tell you it's been at least six weeks since I met with Senate Democrats to literally beg them [for help with the] situation," Mulvaney said according to Politico. "Instead of helping us, they left town. So, now we are asking Mexico to do what it can, because Congress will not."

It is unclear when the tariffs will be imposed if Congress does not act on border security.