Looks Like The Migrant Crisis Is Keeping Greyhound Buses In Business 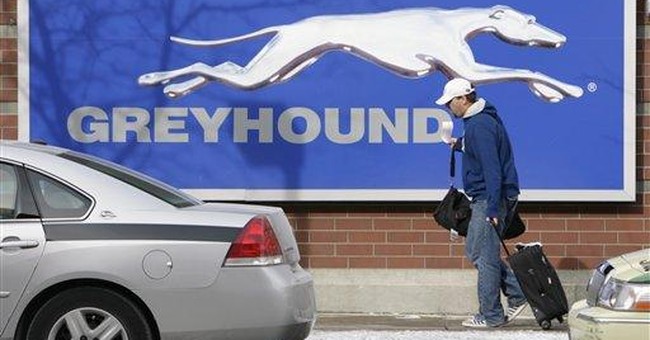 The New York Times reports that due to the surge of migrant families and illegal aliens at the southern border, bus companies like Greyhound buses are experiencing an increase in profit as illegal aliens are bussed all around the country after being processed by immigration authorities.

According to the New York Times, as many as 5,000 illegal aliens per day are entering the southern border from places like Honduras, Guatemala, and El Salvador. Once there, "after an initial 72 hours or so at Customs and Border Protection processing centers along the border, the vast majority of those entering the country now are released to nonprofit respite centers, where they are fed and clothed."

Then, these individuals purchase bus tickets -- costing as much as $300 each -- to be bussed across the country to various cities. Because of this, Greyhound has increased drivers and buses in the southwest region which have in turn boosted profit.

"There is no doubt that the revenue from this immigrant influx is in the millions and helps Greyhound,” Joe Schwieterman, an intercity bus expert at DePaul University told the Times.

A company spokesperson confirmed that the company has "boosted capacity" in order to “meet demand with our available resources of buses and drivers.” "In the Southwest alone, a part of the country that once accounted for 8 percent of the company’s revenue now brings in 11 percent," the New York Times reports.

However, not everybody onboard these vehicles necessarily support the bussing of migrants. One passenger named Don Shockley, 77, a retired truck driver, lamented the surge of illegal aliens, saying “Sometimes, it’s almost like we’re the foreigners...I think we got to build a wall. It won’t keep them all out but it’ll keep some out.”

As to where these illegal aliens are headed, Shockley noted that it “used to be they came to California and Texas. Now they are heading east."

However, just because Shockley wants a wall to keep illegal aliens out of the country, does not mean he is callous towards the challenges of the migrant family. The Times captured one kindhearted moment from Shockley after a migrant family realized they were low on cash and would not be able to afford food for the 24-hour bus ride to Nashville. Julia Cortez, a mother with three children, was saddened by this realization and said, "Oh no, we have no food and no money left.”

Shockley told the reporter, "'Hand it to her,' he said, tipping his cowboy hat. 'I’ve been on the road all my life. People helped me.'"

The entire Times piece is worth the read and sheds light on the trek migrant families make to America and through the country. However, perhaps the most overlooked fact in the story is that many of these families pay upwards of $10,000 to "guides" who bring them through Mexico to the border. These often are not "guides" but rather smugglers whose profit winds up in the hands of drug cartels and other malicious actors.