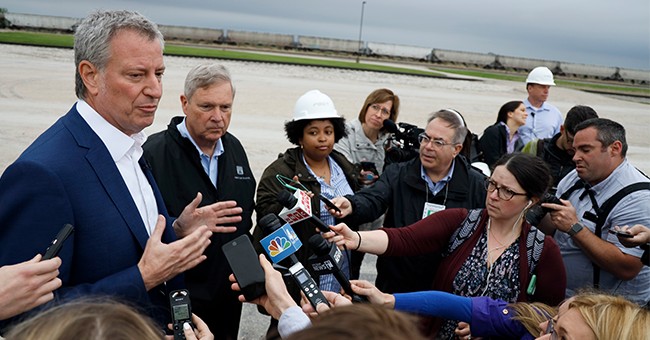 This past week Mayor Bill de Blasio traveled to Iowa, asking voters for their support in the 2020 Democratic caucus. Unfortunately for de Blasio, he first had to answer questions from two New York City residents who flew all the way to Iowa in order to speak with their mayor.

Grace Rauh reported that "Tita Concepcion lives in public housing in New York and came all the way to Sioux City to confront Mayor de Blasio about the problems at @NYCHA."

Tita Concepcion lives in public housing in New York and came all the way to Sioux City to confront Mayor de Blasio about the problems at @NYCHA. New Yorkers, if you want some face time with your mayor, he’ll be in South Carolina today and tomorrow morning. pic.twitter.com/S6AkjxTAON

According to Politico, Concepcion and her fellow New Yorker flew on behalf of the East Brooklyn Congregation. EBC is group of "not-for-profit organizations composed of religious congregations, schools, and homeowner and voluntary associations.  Together, our member organizations represent more than 15,000 active families in East New York, Brownsville, Ocean Hill and Bushwick," according to their website.

"Two women flew to Iowa, courtesy of the organization East Brooklyn Congregations, to confront him on deteriorating conditions in the New York City Housing Authority. They also pressed him on his stalled promise to build more housing for senior citizens on underused NYCHA lots.

“We have been in New York; we have been trying to speak with him,” said resident Tita Concepcion. “All we get are stories from him. He doesn’t listen. He dodges us whenever possible.”

De Blasio listened to them and promised to “stay in dialogue together.”

On Twitter Concepcion said, "It was well worth the trip to let the Mayor know that EBC will not be ignored nor disrespected."

Mayor de Blasio is more or less universally despised by New York City residents. Recent polling shows that 75% of all New Yorkers believe he should not run for president. The man has had other embarrassing displays of out-of-touchness, such as the time he told a homeless activist that he could not speak about poverty issues in the city at the time because he was finishing his working out.

Even the left-leaning Whoopie Goldberg has slammed de Blasio for his ineptitude.  “Not a good career move...Here’s the thing you didn’t mention: Homelessness is near record highs. Congestion pricing will take the minimum wage we just gave to people...Public housing is falling apart. He can’t seem to fire anybody. The buses are slow. What the hell you gonna do? Finish doing what you’re doing here. Finish being the mayor. Finish this out," she said on The View last week.