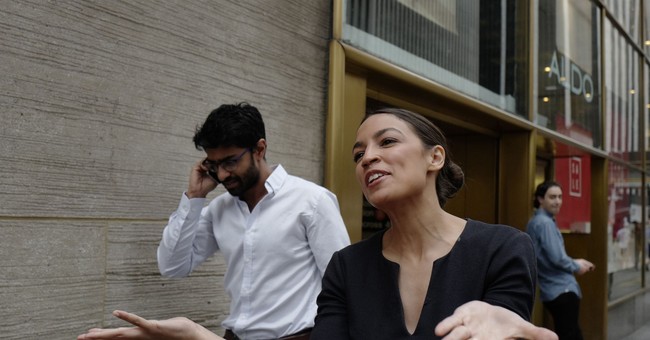 "For thee but not for me," New York Democratic Socialist Rep. Alexandria Ocasio-Cortez apparently beleives when it comes to saving the planet from its potential doomsday within 12 years. A new report by the New York Post shows that the woman who is touted as the "future of the Democrat Party" spends thousands of dollars on fossil fuels and other carbon-emitting expenses.

Since declaring her candidacy in May 2017, Ocasio-Cortez’s campaign heavily relied on those combustible-engine cars — even though a subway station was just 138 feet from her Elmhurst campaign office.

She listed 1,049 transactions for Uber, Lyft, Juno and other car services, federal filings show. The campaign had 505 Uber expenses alone.

In all, Ocasio-Cortez spent $29,365.70 on those emissions-spewing vehicles, along with car and van rentals — even though her Queens HQ was a one-minute walk to the 7 train.

Her hypocrisy continues, as she relays to supporters the importance of being eco-friendly yet regularly displays disregard for waste on her Instagram live videos.

And while she is quick to dispense all sorts of planet-saving tips to her constituents and fans, telling a high-school assembly in Queens last month that they should “skip disposable razors and switch to safety razors” and “skip meat/dairy for a meal,” she doesn’t always take her own green advice.

In a Feb. 24 Instagram video filmed in her kitchen, Ocasio-Cortez railed against plastic grocery bags — then appeared to toss two of the sacks, which can be recycled, into the trash.

“It drives me crazy,” she said of plastic bags. “I wish they didn’t exist.”

In the video, Ocasio-Cortez peeled a sweet potato while calling for a “universal sense of urgency” to save the earth.

But she discarded the vegetable scraps into the same receptacle she had just used for the plastic bags, rather than setting the food waste aside for compost.

Trent refused to answer when asked whether his boss tossed her organic material in the trash.

The freshman congresswoman defended her use of fossil fuels by saying she was simply "living in the world."

Living in the world as it is isn’t an argument against working towards a better future.

The Green New Deal is about putting a LOT of people to work in developing new technologies, building new infrastructure, and getting us to 100% renewable energy. https://t.co/DZGE1WwLbn

This defense sounds as if she is using fellow leftist Bernie Sanders' 2020 presidential campaign slogan -- "Not me. Us."  In AOC's eyes, "it isn't about 'me'," she might say as she's rightfully criticized. "It's about us," as she casts blame on others around her for global warming.