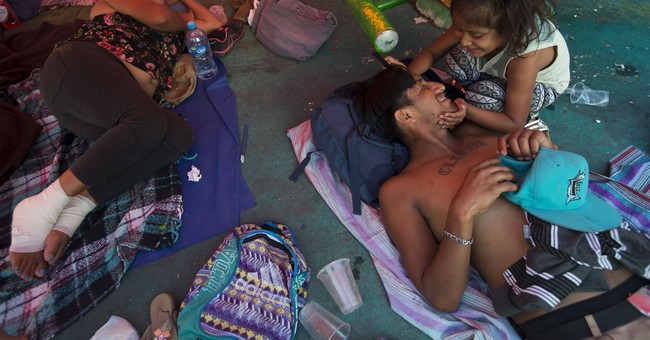 Yesterday,  Tijuana Mayor Juan Manuel Gastelum declared a "humanitarian" crisis as 5,000 Central American migrants settled down in the Mexican city on their journey to America.  The mayor continued, saying that he will not be using any of his citizen's tax dollars on the migrants and requested help from the U.N.'s Office for the Coordination of Humanitarian Affairs.

"We don't have sufficient and necessary infrastructure to adequately attend to these people, to give them a decent space," Gastelum told Mexican media. Gastelum continued, saying that the federal government has all but abandoned its citizens in dealing this crisis.

“They have categorically omitted and not complied with their legal obligations,” Gastelum noted of the Mexican authorities. “So, we’re now asking them and international humanitarian aid groups to bring in and carry out humanitarian assistance.”

“Because of the absence, the apathy and the abandonment of the federal government, we are having to turn to international institutions like the U.N.,” added Manuel Figueroa, the person in charge of the city’s social services department.

Tijuana is now forced to deal with hundreds of sick people who apparently have no plans to leave. According to the San Diego Tribune, "The Government of Baja California Friday reported treating 818 respiratory infections and providing 1,286 general medical consultations to members of the migrant caravan."

But, as noted by one migrant, many are staying put in Tijuana because President Donald Trump requested they do so.

“We just have to wait it out,” Ingris Aquiles said “President Donald Trump has asked us to wait here, so we are going to wait, what else can we do? We have plenty of time to wait.”