After Local Authorities Ignored an ICE Detainer, an Illegal Alien is Now Accused of Killing 3 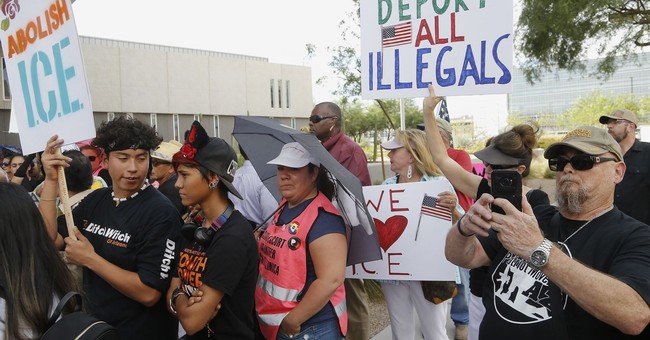 An illegal alien previously detained by a sanctuary city in New Jersey has been accused of killing three individuals in Missouri, but federal authorities argue that these crimes could have been prevented if better cooperation existed between immigration officials and local enforcement.

Perez was then let go by the local officials in December 2017, but ICE was not notified. Now, ICE agents say that this costly mistake is another example of why cooperation is needed and why Sanctuary Cities are endangering the American public.

"Yet again, an ICE detainer was ignored and a dangerous criminal alien was released to the streets and is now charged with killing three people,” Corey Price, the agency's active executive director, said. “Had ICE’s detainer request in December 2017 been honored by Middlesex County Jail, Luis Rodrigo Perez would have been placed in deportation proceedings and likely sent home to his country – and three innocent people might be alive today."

"It is past time that localities realize the perils of dangerous sanctuary policies and resume their primary goal of protecting their residents," Price continued.

But Middlesex authorities claim the blame falls upon ICE for not properly requesting his detainer. Authorities told the Associated Press that, “This order would have authorized Middlesex County to turn over custody of Mr. Perez prior to, or upon completion of his sentence. Instead, ICE officials chose to do nothing, which places all responsibility of Mr. Perez’s actions squarely upon ICE.”

According to Fox News, "Missouri law enforcement officials believe Perez and Aaron Anderson, 19, killed their ex-roommates Steven Marler, 38, and Aaron Hampton, 23, after they were kicked out of their Springfield home. Perez is also accused of killing a 21-year-old Sabrina Starr the next day at her house. He is charged with eight felony counts in the shootings."