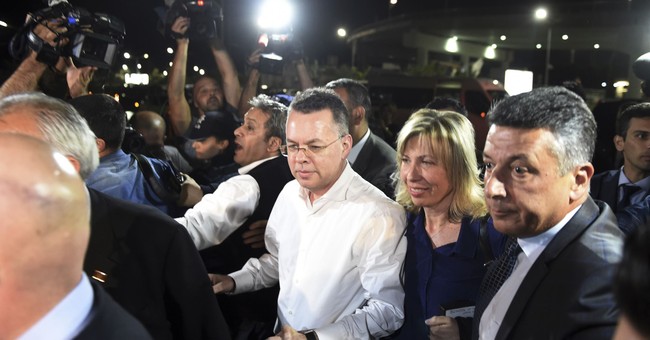 President Donald J. Trump announced via Twitter that he will be meeting with freed American Pastor Andrew Brunson today in the oval office. Brunson was released yesterday after spending two years in a Turkish prison following his arrest in 2016, but thanks to the workings of President Trump, Vice President Mike Pence, and Ambassador Richard Grennell he has now returned to American soil.

As Cortney reported yesterday, "Brunson was arrested in Turkey in October 2016 and was accused of having connections to Kurdish militants and plotting a coup against President Recep Tayyip Erdogan. He is a native of North Carolina, but had been living in Turkey for the past 23 years with his wife and three children.

"While Brunson was detained, the Trump administration made sure Turkey knew the U.S. meant business by imposing tariffs on Turkish imports and slapping financial sanctions on the country, putting a noticeable dent on the Turkish economy. Brunson's release will likely improve relations between the two NATO allies once again."

Pastor Andrew Brunson, released by Turkey, will be with me in the Oval Office at 2:30 P.M. (this afternoon). It will be wonderful to see and meet him. He is a great Christian who has been through such a tough experience. I would like to thank President @RT_Erdogan for his help!

President Trump re-iterated that he does not make deal for hostages and that this was done simpy through diplomatic efforts.

There was NO DEAL made with Turkey for the release and return of Pastor Andrew Brunson. I don’t make deals for hostages. There was, however, great appreciation on behalf of the United States, which will lead to good, perhaps great, relations between the United States & Turkey!

I welcomed Pastor Brunson & his wife to Germany on their refueling stop. He’s almost home thanks to @realDonaldTrump.
When I presented him with the US flag, he immediately kissed it. #agratefulnation pic.twitter.com/b82gA7PXVr