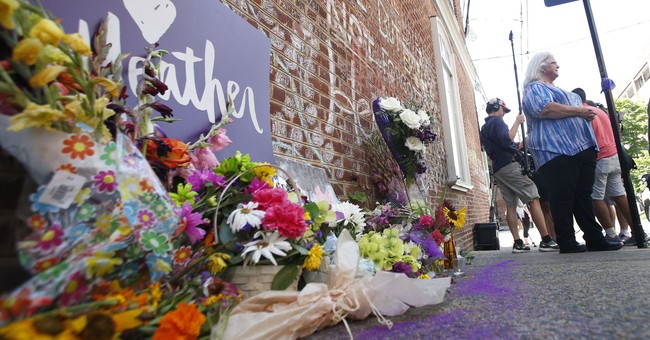 August 12th, 2018 marks one year since Heather Heyer was tragically killed by a neo-nazi in Charlottesville in a violent ordeal known as the "Unite the Right" rally. Heyer was killed when a white supremacist rammed his car into a crowd of counter-protesters during the riot. This Sunday, the same group will be hosting another gathering in Washington, DC. President Trump addressed concerns this morning tweeting that last year's event resulted in "senseless death and division" and condemning all forms of "racism and acts of violence."

The riots in Charlottesville a year ago resulted in senseless death and division. We must come together as a nation. I condemn all types of racism and acts of violence. Peace to ALL Americans!

According to The Week, "Charlottesville will be subject to a heavy police presence this weekend, and the primary organizer of last year's white nationalist event, Jason Kessler, was denied a permit for a concurrent demonstration this year. Instead, he is planning a 'white civil rights' event in Washington, D.C., on Sunday."

As reported last year, following Heyer's death, "about 1,000 people attended a memorial service for Heyer in Charlottesville. Her parents, Susan Bro and Mark Heyer, challenged the mourners to learn from their daughter’s love for others and outspokenness.

In a strong and hope-filled call to action, Bro showed the same resilience that she attributed to her daughter, saying, 'I think the reason that what happened to Heather has struck a chord is because we know that what she did is achievable. We don’t all have to die. We don’t all have to sacrifice our lives. They tried to kill my child to shut her up. Well, guess what? You just magnified her.' -- drawing a standing ovation from the crowd."

President Trump grew criticism last year for his initial response the 2017 "Unite the Right" rally as he said "hate" came from "all sides."

While President Trump was correct that violence emanated from antifa protesters as well as white nationalists, his ambiguous statement left some confused and resulted in accusations that President Trump approved of neo-nazism. Guy Benson's analysis of the situation is well worth the read here and here.

"It was an ugly weekend in Charlottesville, Virginia, where a vile hodgepodge of white nationalists and neo-Nazis rallied in protest of the planned removal of a statue honoring Confederate general Robert E. Lee.  They held torches, flew confederate and swastika flags, and chanted enthno-racist slogans such as, 'Jews will not replace us.'  They were confronted, understandably, by horrified crowds who felt compelled to express their utter revulsion at the hate group.  Unfortunately, a significant portion of the counter-demonstrators were so-called 'antifa' thugs, many of whom came spoiling for a fight.  As violent skirmishes broke out, a young man and apparent Nazi sympathizer intentionally plowed his car into a group of protesters, injuring more than a dozen, and killing a young woman.  This murder was an act of domestic terrorism, committed on dark day in America," Guy wrote after the incident.

"I was quite critical of the president's initial response to the lethal unrest in Charlottesville (calling his follow-up statement welcome but woefully belated), then recoiled at his Tuesday assertion that there were some "fine" people at a white nationalist march.  What I did not do, however, was join the pile-on regarding his points about (a) the contribution of left-wing agitators to violence in Virginia and across the country, and (b) the potentially-problematic implications of tearing down Confederate statues and memorials.  On the former point, he's simply correct; pretending that only one "side" is responsible for political violence is outrageous and flat-out false.  On the latter point, he effectively asked, where does it end?  As if to prove his concerns valid, elements of the Left promptly aired demands that monuments to George Washington and Thomas Jefferson be purged from the public square. As ever, one of Trump's greatest political assets is liberal overreach," Guy added in a separate post.

Counterprotesters plan to confront the neo-nazis again, but there will be severe police presence throughout the city this weekend to help prevent any tragedies. Since Heather's death, a Foundation has been established in her honor. "The Heather Heyer Foundation was created to honor Heather Heyer, a young civil rights activist, who dedicated her life to promoting equal rights for all people. The Foundation has established a scholarship program to provide financial assistance to individuals passionate about positive social change," according to the website. Readers can make a donation to the Heather Foundation here.