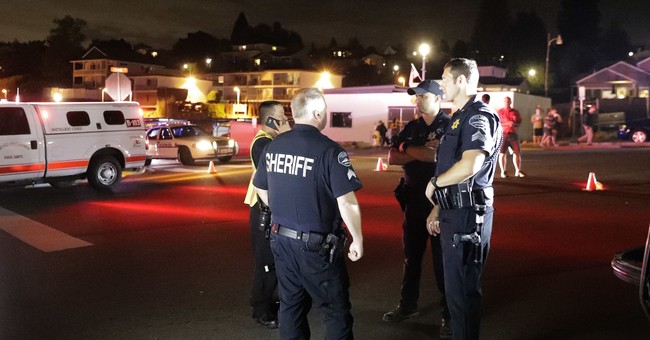 An allegedly suicidal man stole an aircraft from Seattle-Tacoma International Airport and prompted a security scare as authorities scrambled two fighter jets to "do whatever necessary" in order to keep the people Washington state safe. Ultimately, the man crash landed the hijacked Horizon Air Q400 plane after being coaxed by air traffic controllers, but audio and witness accounts paint a disturbing scene.

It is not believed that the man had any assistance in his theft, but authorities are still looking into how exactly he was able to gain control of the airplane. (via Seatle Times)

The plane was taken by a 29-year-old Sumner man about 8 p.m. and crashed on Ketron Island, near Steilacoom, about 90 minutes later, according to the Pierce County Sheriff’s Department. No passengers or crew appeared to be aboard the 76-seat plane.

“A joyride gone terribly wrong,” Pierce County Sheriff Paul Pastor said during a news conference in Steilacoom, which is about 3 miles from the island.

The man, identified only as Rich, seems obviously manic and disturbed in the released audio as air traffic controllers attempt to guide him to safety.

"There is the runway just off to your right side in about a mile,” the controller told him. “That’s McChord” (meaning the military airfield at Joint Base Lewis-McChord).

“Oh man,” Rich immediately responded, “Those guys will rough me up if I try and land there. I think I might mess something up there too. I wouldn’t want to do that. They probably have anti-aircraft.”

“They don’t have any of that stuff,” the air-traffic controller said. “We’re just trying to find a place for you to land safely.”

“I’m not quite ready to bring it down just yet,” Rich said. “But holy smokes, I got to stop looking at the fuel, because it’s going down quick.”

“Could you start a left turn and we’ll take you down to the SE, please,” the air-traffic controller then asked.

“This is probably jail time for life, huh?” said Rich. “I would hope it is for a guy like me.”

“Oh, Richard,” said the controller, “We’re not going to worry or think about that. But could you start a left turn please?”

At one point, Richard apologizes to those he loves for his actions.

“I’ve got a lot of people that care about me. It’s going to disappoint them to hear that I did this. I would like to apologize to each and every one of them. Just a broken guy, got a few screws loose, I guess. Never really knew it, until now.”

As two fighter pilots flew behind and closed in on the Q400, Richard crash-landed the plane in a cloud of smoke.

“It was unfathomable, it was something out of a movie,” one witness said. “The smoke lingered. You could still hear the F-15s, which were flying low.”

There were no reported injuries other than the hijacker, but the ordeal caused dozens of flights delays across the western coast.