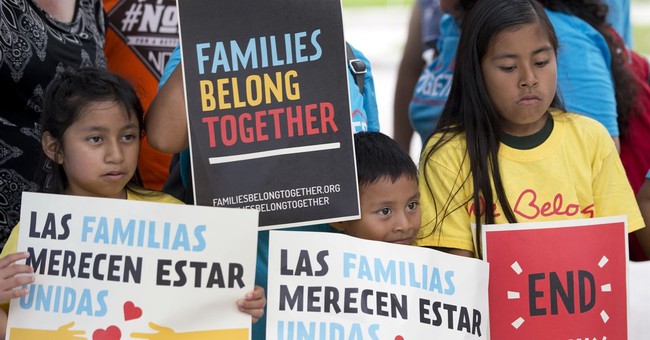 Today, New York City based political commentator, Ryan Girdusky, pointed out a statistic from a CBS poll released today that may surprise some Democratic officials – most Americans want parents and children who enter America illegally kept together as a unit, but prefer that the entire family is either detained or deported after they are caught crossing the border into America. In fact, just 21% of Americans believe that these illegal aliens and their offspring should be released into American streets.

According to a CBS poll, 48% of Americans says that the United States government should “release the entire family back to their home country together.” 11% of Americans believe that the parents should be arrested, but have their children kept with them in the same facility.

As previously mentioned, 21% of Americans say that the government should "release the entire family in the U.S. temporarily and require that they report back for a hearing." Just 4% believed parents and children should be detained in separate facilities.

If there is a lesson that Democratic leaders can learn from this sampling of the American voter, it clearly has not resonated with candidates. Just this week, New York gubernatorial candidate Cynthia Nixon called for the abolition ICE, saying tthat he group responsible for tracking down illegal aliens was acting like a "terrorist organization." As Girdusky said, “This (poll) shows that Democrats are completely out of step with average Americans. Rather than learning from Hillary Clinton’s loss, they’ve doubled down on open borders, amnesty, and lawlessness and Americans don’t want it.”