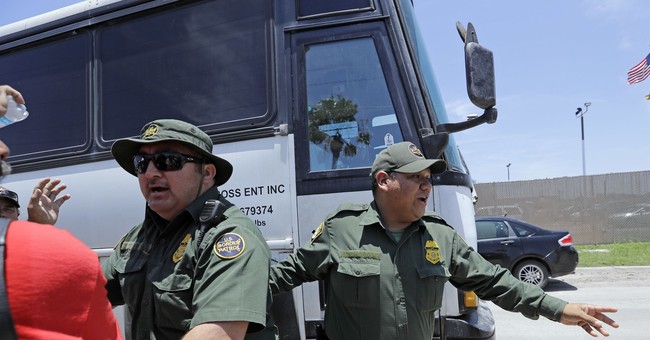 Protesters across the country have swarmed Immigration and Customs Enforcement agencies this past week, leading to at least one Border Patrol agent breaking his ankle while attempting to transport of a bus of illegal immigrants from a detainment center in McAllen, Texas, reports the Daily Caller.

Roughly 200 protesters surrounded the bus and attempted to block the vehicle carrying illegal immigrants from leaving the premises but ended up causing chaos.

The DC’s Virginia Kruta picked up the story as told by “Fox & Friends” Griff Jenkins. “Something we’re learning just this morning, guys, and that is that one of the agents inside here when this bus was moving, when the melee was going on, was trying to control the crowd, was trying to ensure that he also did not step on a smaller little old lady, he broke his ankle. His ankle was broken this morning,” Jenkins said Sunday morning.

Earlier this week, an ICE office in Portland, OR was shut down due to safety threats from Occupy PDX. Occupy PDX is apparently a remnant of the far-left socialist group that stemmed from the 2011 Occupy Wall Street movement. More than 100 people camped in front of an ICE facility earlier this week, reports UPI.

“The ICE office was forced to close Wednesday, days after the group set up a camp and called for the end of the enforcement agency and President Donald Trump's "zero-tolerance" immigration policy.”

"Despite having a three-week-old baby, our family has made the decision to move into the ICE occupation," demonstrator Gregory McKelvey said in a tweet this week. "We won't leave until ICE does. As long as families are being separated, our family will take a stand."

The Occupy PDX protest has since moved to city hall, but it is expected that hundreds of demonstrators across the country will remain at ICE facilities and detainment centers as the child migrant crisis continues.