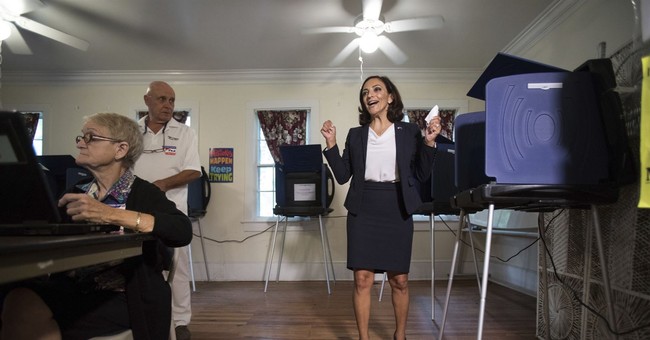 South Carolina Republican congressional candidate, Katie Arrington, is out of surgery and recovering after being critically injured in a severe car crash on Friday night.

Arrington, who recently defeated incumbent Mark Sanford in the South Carolina GOP primary, was driving “south along Highway 17 when their vehicle was struck by a vehicle driving in the wrong direction in the same lane, according to Charleston County Sheriff's Capt. Roger Antonio.”

Arrington and her friend underwent surgery last night. The driver of the other vehicle passed away. It is unclear if alcohol was involved.

Her Democratic opponent, Joe Cunningham, announced that he would be suspending all campaign activity until further notice.

Just hearing about the terrible accident that occurred overnight involving Katie Arrington. Amanda and I are lifting her and her family up in prayer right now. Please join us.

"Last night, Katie Arrington and her friend were traveling to Hilton Head, where Katie was scheduled to receive an award from a state medical organization this morning. Katie was the passenger in the car traveling southbound on Highway 17, when a vehicle traveling in the wrong direction - northbound in the southbound lanes of Highway 17 - struck the vehicle containing Katie and her friend.

Katie sustained a fracture in her back and several broken ribs, as well as injuries that required Katie to undergo major surgery including the removal of a portion of her small intestine and a portion of her colon. Additionally, the main artery in her legs has a partial collapse and will require a stint. Additional surgeries will be required including one likely today; and it is likely that Katie will remain hospitalized for the next two weeks.

As we all know, Katie Arrington is an extremely strong woman and has tremendous faith and an incredibly supportive family. And it is from her strong faith, the support of her family, the prayers and support of our community, and the incredible doctors and staff at the hospital that she is certain she will be back to work for our state soon.

As her family asked last night, Katie asks for your continued prayers for the deceased and the deceased's family, as well as prayers for a quick recovery for Katie and her friend."