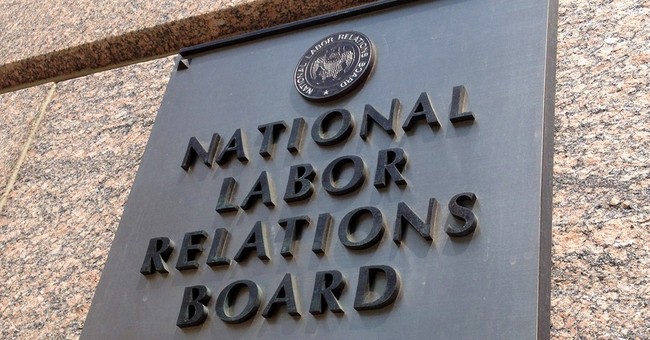 President Donald J. Trump has done a fine job of dismantling President Obama’s disastrous presidency so afar. For the American worker, he has eased many burdens by deregulating the economy at record pace. He has padded their wallets by introducing phenomenal tax cuts that have benefited millions. But, one area that the president could improve upon is in the fight against Big Labor and the death grip that forced unions still have on many people. Specifically, President Trump’s labor board must overturn several labor policies put into effect by Obama's Big Labor cronies that trap workers into unions that they want no part of, says the leading legal defense foundation for employee rights.

National Right to Work Legal Defense Foundation staff attorneys recently filed an appeal to the National Labor Relations Board asking the board to overturn a 2011 Obama-era decision “that blocks workers from holding a decertification vote for up to one year after a union is installed through an abuse-prone card check unionization drive."

National Right to Work Foundation staff attorneys are representing a group of Milwaukee workers who "oppose Teamsters Union Local 200’s monopoly representation" but are barred from removing said union officials from their workplace for at least a year. In January 2018, shipping company USF Holland "recognized the union on the basis of the card check" as opposed to an NLRB-supervised vote.

"Card check" schemes are notoriously corrupt as employees often fear retaliation from union officials if they do not sign authorization forms publicly stating that they want unionization. The "card check" method is different than a closed ballot election, in which employees do no have to fear their desire, or lack thereof, for unionization being made public.

“The Teamsters have a long and well-deserved reputation for corruption and violence, so it’s no surprise that [the workers] in this case who filed for a decertification vote would prefer the privacy of a secret ballot to the coercion and pressure tactics inherent in a union card check organizing drive," said National Right to Work Foundation president Mark Mix.

However, according to the Foundation, the workers at USF Holland cannot remove these union officials due to a "controversial 2011 Lamons Gasket ruling that bars workers from holding a secret ballot decertification vote for one year after they have been unionized through the card check process." Employees gained the necessary amount of signatures needed to hold a decertification vote to remove Teamsters Union Local 200 but are effectively trapped into paying forced dues to union officials due to Lamons Gasket for at least a year.

To make matters worse, the Lamons Gasket ruling overturned a previous Foundation-won ruling known as the Dana decision.  Dana "gave workers the opportunity to challenge card check unionization with a secret ballot vote. Under the Dana precedent, workers can collect signatures to request a secret ballot election during a 45-day window following notice that they have been forced into union representation by a card check organizing drive."

But, with the Obama policy in place, workers have to wait at least a year before a union can even be attempted to be removed by workers.

“The disastrous Lamons Gasket decision was one of many by the Obama Labor Board that elevated the powers of union bosses over the rights of individual employees, and it should be swiftly overturned,”  added Mix. “Nothing in the National Labor Relations Act says that workers should be denied a secret ballot decertification vote on the basis of a card check recognition, which the Act and U.S. Supreme Court view as inherently inferior to an NLRB-run vote.”

According to the Foundation press release, the workers' appeal asks "the new Trump NLRB to not only overturn that Obama-NLRB precedent, but to remove all limitations on workers filing to decertify a union following unionization through card check."