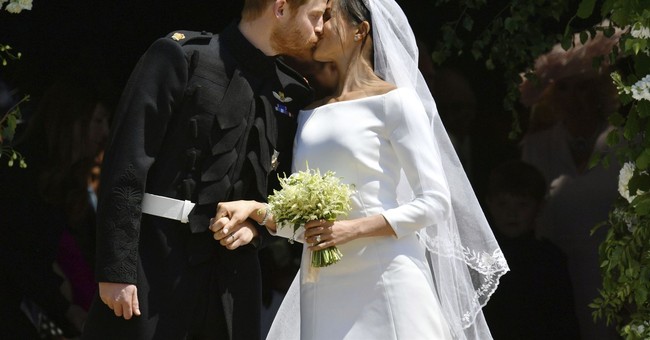 Meghan Markle, the American TV star turned British Royal, looked beautiful in what many are calling a very simple, but respectful, elegant, and classy Givenchy gown. Her new husband, Prince Harry, could not contain his love upon seeing his bride to be.

Now known as Duchess of Sussex, Meghan Markle walked down the aisle in a Givenchy gown designed by Clare Weight Keller.  BBC News, says Markle "met Ms. Waight Keller this year" and loved her minimalist yet beautiful approach to fashion.

According to Keller, she "wanted to create a timeless piece that would emphasize the iconic codes of Givenchy throughout its history, as well as convey modernity through sleek lines and sharp cuts."

The BBC also notes that, "Ms. Markle wore a five meter-long white silk veil covering her face which included floral detail representing all 53 countries of the Commonwealth. The bride suggested the design because the Commonwealth will be a central part of her and Prince Harry's official work after they are married." Queen Elizabeth II lent her new family member a tiara for the special occasion.

In an adorable moment caught on camera, Prince Harry remarked to Meghan, "You look amazing. I'm so lucky."

Prince Harry was given special permission from the Queen to wear his Royal Blues for the wedding. Prince Harry served in the British Army for ten years, partaking in two tours of Afghanistan, and rising to the rank of Captain.

After the wedding, the Duchess and Prince will live in the historic Nottingham Cottage at Kensington Palace.