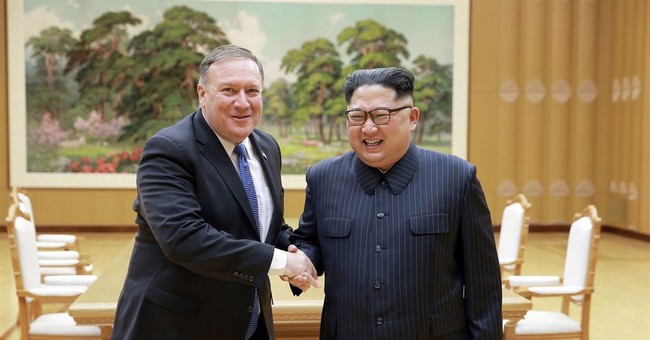 Today on a variety of talk shows, relatively newly confirmed Secretary of State Mike Pompeo gave more detail into what kind of deal President Trump is hoping to strike with North Korea’s Kim Jong-un. In short, the US is hoping for a long-term deal that rids the communist nation of nuclear weapons in exchange for sanctions relief and economic development, plus security. In addition, Pompeo also said that he is confident that Kim Jong-un “shares the objectives of the American people." President Trump is scheduled to meet with the man he once nicknamed "Rocket Man" on June 12th for historic peace negotiations.

“I have told him that what President Trump wants is to see the North Korean regime get rid of its nuclear weapons program, completely and in totality, and in exchange for that we are prepared to ensure that the North Korean people get the opportunity that they so richly deserve,” Pompeo said on CBS “Face the Nation.”

"No president has ever put America in a position where the North Korean leadership thought that this was truly possible, that the Americans would actually do this, would lead to the place where America was no longer held at risk by the North Korean regime," Pompeo added.

In addition to exonomic sanctions relief, Pompeo asserted that funding would not come from tax payers, per se, but from US private investment.

"If we get if we get denuclearization, of course there will be sanctions relief. Certainly. There will be more than that. There'll be..the president has a commitment and he will make this commitment to Chairman Kim, I am confident, that says if you do the things we need to do so that America is no longer held at risk by your nuclear weapons arsenal and that you get rid of your program and missiles that threaten the world, we will ensure that your people have the opportunity for the greatness that I know Chairman Kim wants them to have," the Secretary of State said.

But on Fox News Sunday, he told Chris Wallace that in exchange for denuclearization, the US “will have to provide security assurances, to be sure.”

He also added his confidence in Kim Jong-un to work with President Trump.

“When I said earlier this week that I think Chairman Kim shares the objectives of the American people, I am convinced of that,” Pompeo told “Fox News Sunday." “Now the task is for President Trump and he to meet to validate the process by which this would go forward, to set out those markers so that we can negotiate this outcome.”