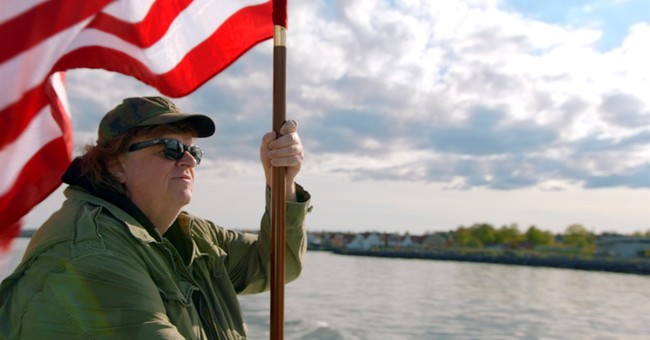 That dude with the large tummy, big mouth, and even fatter wallet is back again, this time to wish his comrade Karl Marx a very special birthday. Michael Moore, the left's favorite documentarian, tweeted his plaudits for the communist today.

Moore hails from the great state of Michigan. The median yearly salary there is $57,091 according to the Washington Post. Moore's estimated net worth? $50 million. Nothing is stopping the "Roger & Me" creator from giving away all of his salary and helping the poor. It is unclear if he considers himself greedy for keeping most his money. His website used to feature a page detailing justification for how he was different than the "super wealthy" that he seems to detest. That portion has been deleted.

But, Kelly McParland of the National Post saved most of it back in 2011.

"...he seems to confess that, yes, he is a rich guy after all. But not like other rich guys. He’s a rich guy who comes from a working class background, who scraped and scrambled for his money, and who cares. When he sold his first documentary, he recounts, he was paid $3 million and immediately shared the good news “with a group of factory workers, students and the unemployed in the middle of the downtown of my birthplace, Flint, Michigan.”

Not only that, he shared the money. He paid every cent of tax owing (no loopholes or avoidance strategies), set up a foundation to help others, spent a small fortune buying stuff and paying debts for others, and put the rest in a savings account (no investments or Wall Street gizmos).

Finally, he says, “I made the decision that if I was going to earn a living, it would be done from my own sweat and ideas and creativity. I would produce something tangible, something others could own or be entertained by or learn from. My work would create employment for others, good employment with middle class wages and full health benefits.”

And that’s why he’s not really a member of the 1%,  the “greedy, lazy class who didn’t produce any product, just misery and fear among the populace.” He makes his money honourably, in the old-fashioned way, not from capitalism. “Didn’t you take Econ 101? Capitalism is a system, a pyramid scheme of sorts, that exploits the vast majority so that the few at the top can enrich themselves more. I make my money the old school, honest way by making things. Some years I earn a boatload of cash. Other years, like last year, I don’t have a job (no movie, no book) and so I make a lot less.”

He makes things. And he shares his good fortune with others. That’s the basis of the pulpit he uses to denounce “the 1%”, the greedy, exploitative elite he despises. Yes, he shares their wealth and success, but he gives back, and sympathizes with workers, provides jobs at good salaries. Not like them.

McParland goes on to list various billionaires and millionaires who, believe it or not, make things and earned their wealth. They even give back to the community, too. Ultimately, he says the difference between those folks and Moore is that for some reason Michael thinks that he is better than they are.

"Not everyone on the list of the wealthiest is a generous creator of jobs, but many are. And they don’t leverage their own prosperity the way Moore does, using his political leanings as a come-on to peddle more books and other products. Moore’s web site is a canny capitalist marketing tool, weaving in updates on the travails of the OWS crowd with promos for his latest appearances and warnings that time is running out to get a signed first printing."

Yet again the hypocrisy of the left knows no bounds. Though, if Moore can continue to make anti-capitalist, anti-United States documentaries that rake in boatloads of cash, more power to him. There is nothing against the law by making money off free speech, even if the veracity of said speech is questionable. But you know what they say, Michael: "Only in America."