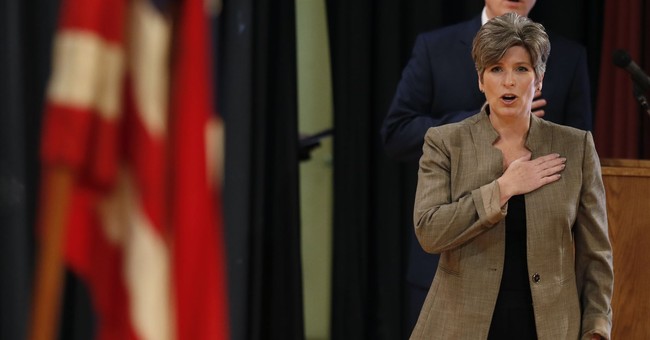 Sen. Joni Ernst (R-IA) sat down with Chuck Todd on today’s episode of Meet the Press to discuss a host of topics. When asked about former FBI Director James Comey’s new book, A Higher Loyalty, the senator had a message about earning each other’s respect.

"I want to get you to respond to this criticism. James Comey laid out in all of Congress in his book on the attacks of the law enforcement community and he writes this, “I know there are men and woman of good conscience on both sides of the aisle who understand this, but not everyone is speaking out and they must ask themselves to what or to whom they owe a higher loyalty and their silence is complicit and it is a choice and somewhere deep down they must know that.’ Do you accept this criticism that you and others have not spoken out enough in support of law enforcement as the president has at times rhetorically undermined law enforcement?," the host asked.

“Well, I think that we do stand behind those men and women of our various agencies. Those that are truly non-partisan and those that are working for the good of the American people,” Sen. Ernst responded.

"I have not read James Comey’s book…But I would say that as head of an agency there is need for a level of respect going both ways. So I respect the men and women that do their job, and do it in a non-partisan manner and wish that we had seen that a little bit more from some of the heads of the federal agencies in the government as well.”

These comments from Sen. Ernst come just hours after President Donald J. Trump predicted that Comey will go down as the worst FBI director in history.