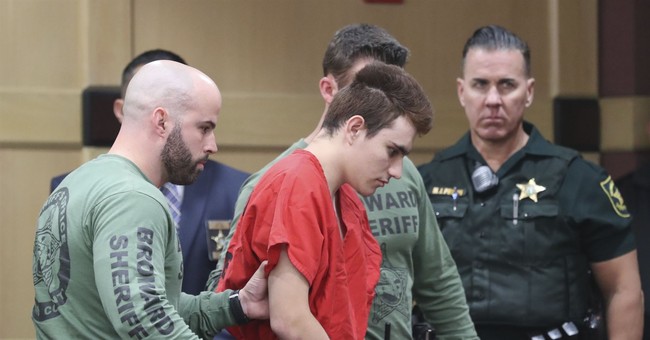 By now, it is clear that many officials either willfully ignored or missed warning signs that the mass murderer who killed 17 innocent Americans in last month's shooting at Marjory Stoneman Douglas High School in Parkland, Florida needed severe mental help. But, until today, it was never clear that anybody had actually recommended Nikolas Cruz for involuntary institutionalization.

The Associated Press now reports that school officials and a sheriff's deputy recommended that Cruz should be "forcibly committed."

"From the Associated Press:

...documents in the criminal case against Nikolas Cruz and obtained by The Associated Press show school officials and a sheriff's deputy recommended in September 2016 that Cruz be involuntarily committed for a mental evaluation.

The documents, which are part of Cruz's criminal case in the shooting, show that he had written the word "kill" in a notebook, told a classmate that he wanted to buy a gun and use it, and had cut his arm supposedly in anger because he had broken up with a girlfriend. He also told another student he had drunk gasoline and was throwing up. Calls had even been made to the FBI about the possibility of Cruz using a gun at school.

The documents were provided by a psychological assessment service initiated by Cruz's mother called Henderson Behavioral Health. The documents show a high school resource officer who was also a sheriff's deputy and two school counselors recommended in September 2016 that Cruz be committed for mental evaluation under Florida's Baker Act. That law allows for involuntary commitment for mental health examination for at least three days.

As the AP notes, the school resource officer who recommended institutionalization was Scot Peterson. Peterson is the man who resigned for failing to enter the building where the shooting was occurring for several minutes after arriving first at the scene.

Had Cruz actually been committed, he more likely than not would have been prevented from purchasing the deadly weapons used in the horrific shooting.