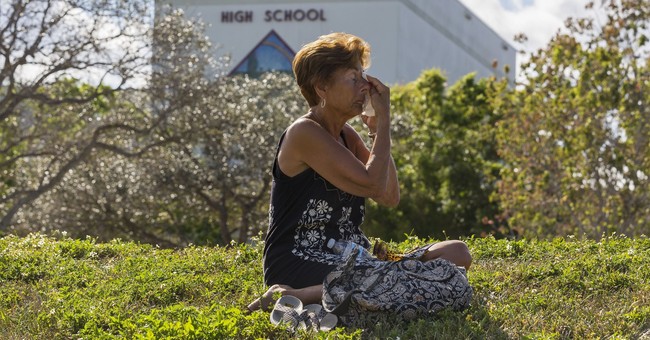 Florida state senators visited Marjory Stoneman Douglas High School Thursday to survey the damage left by a madman with a gun who killed 17 innocent Americans. According to the Miami Herald, many were haunted by what they saw. However, the damage could have been much, much worse if not for hurricane strength windows used to protect the building from natural disasters.

“It could have been a killing field,” Florida state senator Wilton Simpson told the Miami Herald. Simpson broke down in tears while retelling the scene to the newspaper. “It was horrific."

But it could have been much worse.If not for hurricane-proof windows, a calculated Cruz would have had a vantage point where he could have mowed down hundreds of students fleeing the building.

“Cruz fired several rounds, but the windows wouldn’t break, so the gunman dropped his rifle on the stairwell, removed his flak vest to reveal his “Stoneman Douglas” shirt, and went outside where he joined the parade of fleeing students streaming onto the football field, the legislators said. He had five 30-round magazines that were not used, the lawmakers said. He could have continued to shoot.”

“If he had been able to breach those windows, he would have had hundreds of more victims,” Simpson said.

Simpson was joined by Sen. Bill Galvano, and Sen. Oscar Braynon, and Sen. Kevin Rader after being invited by Sen. Lauren Book.

“I told them if we are ever going to change anything, they need to see it and look at it. We have three more weeks in this legislative session. We have to do something,” Sen. Book said to the paper.

Share this on Facebook
Tweet
What to Expect From the First Durham Probe Trial
Mia Cathell
Rubio Forces NIH to Admit There’s No Conclusive Data on the Impact of Puberty Blockers on Children
Madeline Leesman
College Professor Makes Wild Claim About How Many People Are Killed By White Supremacists
Julio Rosas
Here Are the 11 Senators Who Voted Against Another Unaccountable $40B for Ukraine
Spencer Brown
After Backlash, NJ School Officials Dig Their Heels in on New Sex Ed Standards