The First Lady Fights Back Against Marital Strife Rumors 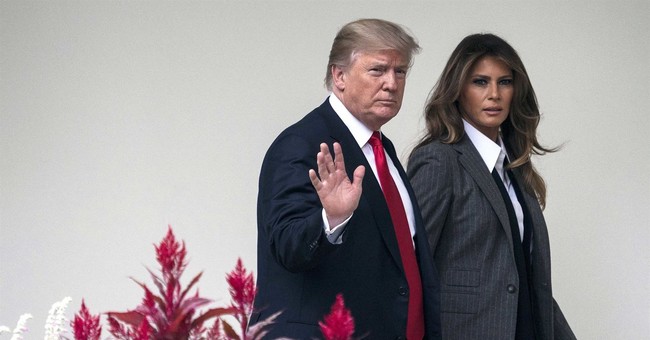 The Office of the First Lady lambasted explosive reports that President Donald Trump and his third wife, Melania, were having marital troubles after she failed to attend an overseas trip to Davos, Switzerland for the World Economic Forum, reports the Associated Press.

Melania was scheduled to attend the aforementioned overseas trip, but instead took an unannounced trip to Florida. She also attended the Holocaust Museum to pay tribute to those killed during World War II as part of international Holocaust Remembrance Day.

“My thoughts and prayers are with the people whose lives and families were broken by the horrors of the Holocaust. Yet it is also through our shared humanity that we come together now in commemoration, strength, and love. My heart is with you, and we remember,” the First Lady told the media.

She later tweeted, “Thank you @HolocaustMuseum for a powerful & moving tour that honors the millions of innocent lives lost, and educates us on the tragedies and effects of the holocaust.”

Despite the constant negativity from the media, Mrs. Trump has shown remarkable humility and tenderness as the First Lady. Lifezette’s Andrew Och poignantly wrote about the grace and dignity that she has had while assuming the of the First Lady.

“From Och: Melania Trump continues to publicly embrace a role the press continues to say she is not embracing. She is against bullying in all forms, but particularly cyber-bullying, as she is (in my opinion) one of the most bullied first ladies in modern history. In her efforts to combat these cruel actions in our society, she leads by example. She takes the high road and traverses it with style and grace. She gives her critics no fuel for their smoldering fires with her lack of response to their harsh words. She steadies her course and proceeds with her plan.

Each first lady has the distinct ability and privilege of making the role uniquely her own. Melania Trump has done everything she said she would do as first lady and more — and she's only just begin. She’s done so with dignity.”