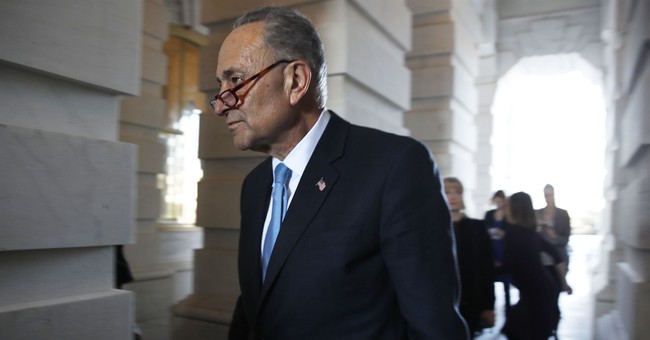 UPDATE: The United States federal government has officially shutdown after failing to reach a funding agreement. With varying exceptions, all non-essential staff and agencies will now lack the required monies needed to run until an agreement in the senate can be reached.

The White House put out the following statement, placing the blame for the government shutdown squarely on the Democrats.

Just in: White House statement on the “Schumer Shutdown” pic.twitter.com/pSOHhkt7oF

There will be more Townhall coverage on this in the morning.

President Donald J. Trump took to Twitter late Friday evening to express his concern that Senate Democrats would be unable to compromise and avoid a federal government shutdown before the midnight deadline.

Not looking good for our great Military or Safety & Security on the very dangerous Southern Border. Dems want a Shutdown in order to help diminish the great success of the Tax Cuts, and what they are doing for our booming economy.

Shortly thereafter, the Senate failed to reach the necessary number of votes needed to continue funding the federal government.

CNBC, gave a fairly decent summary of the ordeal:

The measure appeared to fail in a procedural vote that was still open in the Senate at 10:45 p.m. ET. Five Democrats — Joe Manchin of West Virginia, Joe Donnelly of Indiana, Heidi Heitkamp of North Dakota, Doug Jones of Alabama and Claire McCaskill of Missouri — had backed it, though their votes could change. Four Republicans — Lindsey Graham of South Carolina, Jeff Flake of Arizona, Rand Paul of Kentucky and Mike Lee of Utah — opposed it pending the vote becoming final.

As nearly all Democrats and some Republicans opposed the measure that failed to work its way through Congress on Friday, lawmakers will have to craft a new plan quickly or see government funding lapse, at least temporarily. The proposal that failed in the Senate would have funded the government through Feb. 16 and reauthorized the popular Children's Health Insurance Program for six years.

The Senate needs to garner 60 votes for a spending bill. With 50 Republicans present, the majority GOP needed to win support from 10 or more Democrats, many of whom had threatened to oppose a short-term spending plan if they could not also pass a bill shielding young undocumented immigrants from deportation. (Sen. John McCain is away from Washington, receiving treatment for cancer.)"

Now, with one hour left before the deadline, it is quickly becoming apparent that what is being branded the #SchumerShutdown is inevitable.

Talks between Senate leadership are occurring, but it is unclear what deal could possibly be reached at this late hour. Townhall will update shutdown coverage tonight and tomorrow morning.