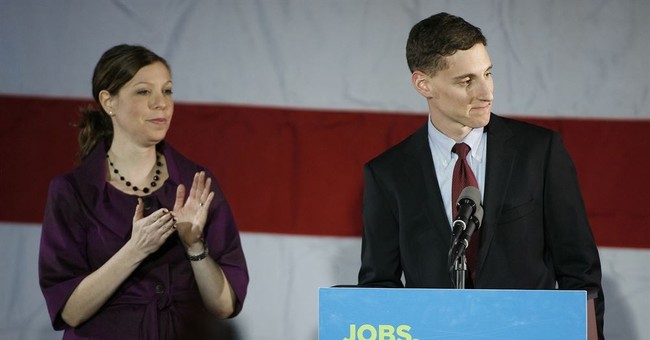 Republican Ohio Treasurer Josh Mandel is dropping out of the Buckeye state's 2018 U.S. Senate race due to his wife’s health complications, reports Politico.

"We recently learned that my wife has a health issue that will require my time, attention and presence. In other words, I need to be there," Mandel wrote in an email to supporters. "Understanding and dealing with this health issue is more important to me than any political campaign."

"I’m writing today to let you know that I am ending my campaign for U.S. Senate in order to be there for my wife and our three children," he continued. "This was a difficult decision for us, but it’s the right one."

Mandel was competing against incumbent Democrat Sen. Sherrod Brown in a repeat of the 2012 senate election. Six years ago, Mandel lost to Sen. Brown in one of the nation's most closely watched and most expensive races in the nation. Mandel was only the 35 at the time, but had served for two years as the state's treasurer. Mandel also served in the Marines Reserves and completed two tours in Iraq. His campaign spent $12.6 million dollars with outside groups bringing in millions more.

After Mandel's 2012 election defeat, he appeared on stage with his now sick-wife, Ilana, for his concession speech.

"This was a David vs. Goliath type fight, and we did not turn up victorious,” he said. "I’m proud to stand up here, and I believe we left it all on the field," he said after his defeat." I don’t know what else we could have done to win this race."

Mandel is widely respected around the nation, not just for his patriotism and conservative principles, but for his character and dedication to his family. Sen. Marco Rubio (R-FL) tweeted his support for the Mandels earlier today

.@JoshMandelOhio would be an outstanding Senator, but I am proud of my friend for putting his family first. Jeanette and I will be praying for Ilana, Josh, and their family as they confront her health challenge together.

“Josh, Ilana and the entire Mandel family will be kept in our prayers during this difficult time,” said NRSC Chairman Cory Gardner. “Not only is Josh a dedicated husband and father, but he’s also a strong, conservative leader. I know he will continue to make a difference in Ohio and nationally for years to come.”

According to Politico, Sen. Sherrod Brown's campaign sent their sympathy and support as well.

“At this time, we wish Josh, Ilana and their family the best of health. We hope for Ilana's full and speedy recovery," Brown campaign manager Justin Barasky said.

It is unclear which candidate will take Mandel's spot on the ballot. The campaign did not specify what illness his wife as. Nonetheless. thoughts and prayers are with the Mandel family.