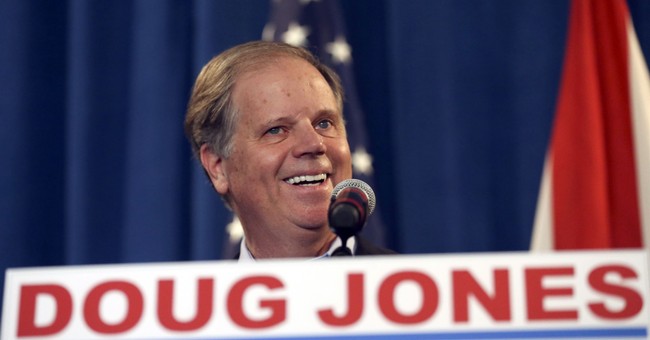 Alabama Democratic senate-elect Doug Jones sat down on CNN's "State of the Union" with Jake Tapper on Sunday to discuss the presidency and his upcoming term in the Senate. When asked about President Donald J. Trump’s sexual assault accusers and whether not the commander-in-chief should resign, Jones strayed away from typical Democrat talking points.

“Where I am on that right now is that those allegations were made before the election. And so people had an opportunity to judge before that election. I think we need to move on and not get distracted by those issues.

“Let’s get on with the real issues that are facing people of this country right now, and I don’t think the president ought to resign at this point. We’ll see how things go but certainly those allegations are not new and he was elected with those allegations at front center.”

Last week, several prominent Democratic senators, such as Sen. Cory Booker of New Jersey and Sen. Jeff Merkley of Oregon, called for the President to step down due to sexual assault claims from various women spanning decades. This request comes after several Republicans and Democratic elected officials have left office due to sexual allegations of their own.

Doug Jones is the first Alabama Democratic senator elected in 25 years. He will have to stay close to the center on a variety of issues if he hopes to be re-elected in 2020. To that end, Jones encouraged his colleagues to “move on and try to work with some real issues" instead of focusing on alleged sexual misconduct allegations against Trump.

“Again, I go back to the fact that those allegations were made and he was elected president of the United States and I think the American people have spoken on that at this time.

“There’s other things out there but I think at this point we need to move on and try to work with some real issues that are facing the country and not worry about getting at odds with the president any more than we have to.”