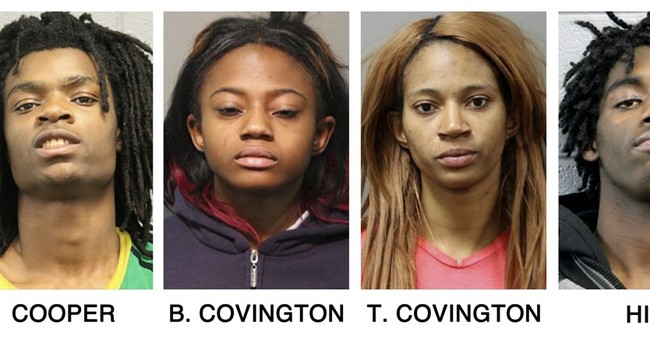 One four Chicago area adults arrested for the brutal racially motivated  hate crime beating of a disabled teenage Trump supporter this past January has been given a sentence of four years probation.

Brittany Covington has been in custody since January, after she and three of her accomplices filmed themselves hurling racial slurs, saying “f*ck Donald Trump, and physically abusing an 18-year-old man with mental disabilities.

Christine covered the story when it first broke:

“The video, which was posted on Facebook on Tuesday using the social network's "Live" feature, was taken by a woman who appeared to be in her teens or early 20s and featured a group beating a man who was bound and gagged. At one point in the video, the victim is slapped repeatedly and is seen bleeding from his scalp.

Throughout the video, people can be heard saying "F*** Donald Trump" and "F*** white people," among other things. At one point, the woman taking the video laughs at how her sister had commented telling her to stop beating the man.

FOX 32 Chicago shared a short clip of the stream to their Facebook page. The full video, which will not be shared here, was posted on Reddit and YouTube.”

Shortly there after, the four were charged with a hate crime and battery.  On Friday, Covington received her sentencing from Cook County Circuit Judge William Hooks. Apparently Hooks believed jail time would not benefit the 19 year old woman, according to the Chicago Tribune.

Calling the incident “horrific,” Cook County Circuit Judge William Hooks banned Covington from social media over the four years, prohibited her from contact with two of her co-defendants and ordered her to do 200 hours of community service.

“Hooks told Covington he could have imposed a prison sentence but added, “I’m not sure if I did that you’d be coming out any better.”

Hooks said he hoped the strict terms of probation would put Covington on a more productive life path, but he warned she would face prison time if she violated any of the restrictions.

“Do not mess this up,” Hooks told Covington, who stood quietly in a blue jail uniform with her hands clasped behind her back.”

If for some reason readers want to watch this heinously evil act, part of the video can be seen on Chicago Tribune’s website.

"Compare her punishment to that of her victim whose grandmother said, “This is going to affect him for probably the rest of his life.” This man is likely going to have to carry around baggage from this kidnapping and assault while Brittany Covington is out of jail in less than a year.

Chicago has quite the reputation for crime and by giving such a light sentence in this matter, it’s easy to see why that reputation is earned. Time will tell if Brittany Covington’s co-defendants get a similar deal."