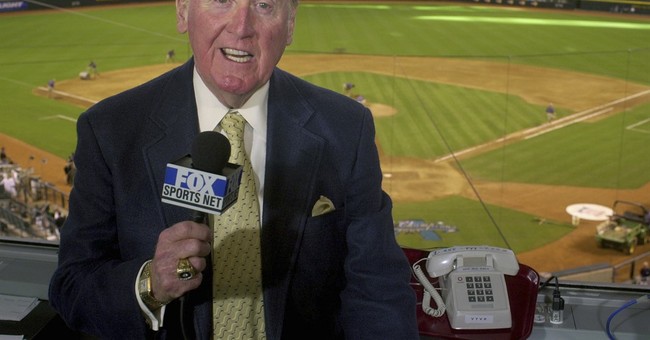 The National Football League’s colossal failure to properly handle a public relations disaster stemming from league wide National Anthem protests as a way to draw attention to police brutality has led to dismal ratings throughout the season. Thousands, if not millions of fans, have tuned out the NFL this fall, with #BoycottNFL  a popular Twitter feature on any given Sunday.

But, so far there has not been quite exactly any legendary sports figure to jump aboard and disavow the NFL for allowing players to kneel during the anthem.  That changed last night when Vin Scully, one of the most popular sports announcers for the better half of the past century, pledged to never watch an NFL game again.

Speaking to a crowd in California, Scully expressed his dismay and grievance towards players who kneel during the anthem as a sign of disrespect towards the military.

Retired Hall of Fame Announcer Scully is most well known for gracing the airwaves as the Los Angeles Dodgers’ announcer from 1950-2016. But, Scully also announced various NFL games from 1975-1982.

Scully was speaking last night at a fundraiser at the Pasadena Civic Center for an event called "An Evening With Vin Scully."

SCULLY: "I have only one personal thought, really. And I am so disappointed. And I used to love, during the fall and winter, to watch the NFL on Sunday. And it's not that I'm some great patriot. I was in the Navy for a year -- didn't go anywhere, didn't do anything. But I have overwhelming respect and admiration for anyone who puts on a uniform and goes to war. So the only thing I can do in my little way is not to preach. I will never watch another NFL game."

Scully’s comments should worry NFL executives. The man has massive clout in the world of sports. He isn’t known for politicization of culture, but his comments most likely indicate a strong undercurrent in American discourse. For many, it may be too late for the NFL to salvage the relationship it once had with American sports fans.

Below, Vin Scully shows his class and humility after accepting the Icon Award at a recent ESPY's award show.