Trump to Kaepernick: You're Fired! 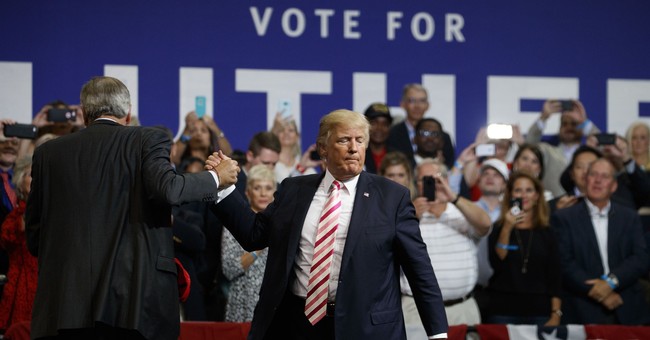 President Donald J. Trump was in vintage campaign form Friday night, appearing on behalf of Sen. Luther Strange (R-AL) in Huntsville, Alabama. President Trump spoke about everything from North Korea to the border wall to his support in the Alabama Republican primary for Strange – but the sound-bite that drew the loudest applause was when President Trump took aim at National Football League (NFL) players who take a knee during the national anthem, rather than stand.

Trump then, sensing the emotion of the crowd, said “Wouldn't you love to see one of these NFL owners, when somebody disrespects our flag, to say 'get that son of a b*tch off the field right now - he's fired.'"

This line brought wild cheers from the maximum capacity crowd of 9,000 in Huntsville’s Von Braun Center arena. President Trump was referencing the recent protests in the NFL started by Colin Kaepernick.

Kaepernick was the starting quarterback for the San Francisco 49ers, but in 2016 decided to take a knee during the national anthem rather than stand to bring attention to police brutality and racial injustice. This sparked a wave of national debate over the appropriateness of disrespecting the flag, the country, and those who fought and died in service for Americans.

Kaepernick has drawn criticism from former and current players, military veterans, and others for his refusal to stand. Since Kaepernick started these protests, he has been cut from the 49ers and unable to find a new team willing to hire him. Many speculate he is being blacklisted by NFL owners for his protests. It should be noted that despite having a few good seasons under former 49ers coaching great Jim Harbaugh, he hasn’t had the best production for an NFL quarterback in recent years.

Still, he does have his supporters and is arguably one of the most polarizing figures in sports and public life today. President Trump’s line, per usual, was met with a mixed response outside of the venue. Nearly a dozen NFL football players took to Twitter to respond to the President.

Trump stay in ur place... football have nothing to do wit u smh

Others, though, praised Trump for direct condemnation of those who refuse to stand for their country. Donald Trump Jr.’s tweet received over 10,000 retweets and 31,000 favorites.

Love this: @realDonaldTrump on NFL players disrespecting our flag/anthem: "get that son of a bitch off the field right now - YOU'RE FIRED!"

Critics are harping on the fact that President Trump cursed and targeted a citizen, but Americans should be reminded of the time President Obama used similar language. After the 2010 BP oil spill, President Obama said he waiting to learn more information about the environmental disaster so he could find out "whose ass to kick."