Democrat Spending Bill Will Bring Nothing But More Economic Hardship 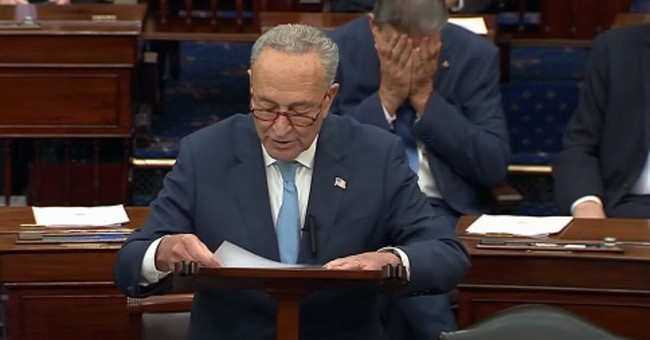 After months of trying and failing to get enough votes in the Democrat-controlled Congress to pass sweeping social spending legislation, Senate Majority Leader Chuck Schumer (D-NY) finally convinced Senators Joe Manchin (D-WV) and Kyrsten Sinema (D-AZ) to abandon their previously stated principles and put their party over what's best for their constituents.

Since the result of Schumer's closed-door negotiations was announced, it's been clear that the bill — referred to unofficially as "Build Back Better Jr." but officially named the "Inflation Reduction Act" — will not do anything it's being proclaimed to do.

As Townhall reported, the "Inflation Reduction Act" won't actually reduce inflation. In fact, it might even add slightly to inflationary pressure for the next two years. That false name is enough to prove the legislation is a trojan horse for radical Democrat policies and would be better dubbed "Democrats' Job-Killing Middle-Class Tax Hike for Woke Nonsense."

But worse than failing to address inflation, the legislation Biden has been begging Congress for over the last 18 months will add even more pain to Americans struggling under his economy — even those he has repeatedly promised wouldn't see increased costs under his administration's policies. And Democrats on the ballot in November will seemingly have nothing to show their constituents other than higher tax bills as a result.

Every incumbent Democratic senator running in fall who's in danger of losing their seat --Bennet in CO Hassan in NH, Kelly in AZ, Murray in Washington State, Cortez-Masto in NV, Warnock in GA-- could have had ANYTHING they wanted for their states. They got nothing but taxes.

As Vespa reported, a review of the bill by the Joint Committee on Taxation concluded that all Americans would see their taxes increase under the legislation, with Americans who make less than $400,000 shouldering a significant portion of the increases — something Biden promised lied wouldn't happen. Here's where the taxes would hit, as reported by the JCT:

Making matters even worse, according to the Tax Foundation, the legislation set to be taken up this weekend would cost as many as 30,000 full-time equivalent jobs, reduce GDP, and lower Americans' wages.

As a reminder, negative GDP growth has already been seen under Biden for two consecutive quarters — meaning we're in a recession — and Democrats want to put another drag on GDP. What's more, wage growth under Biden continues to be outstripped by consumer inflation that's seen Americans' real wages drop around four percent in the last year — so naturally, Democrats are pushing to reduce wages further.

Upstream from consumers, analysis by the Joint Committee on Taxation also found that roughly 50 percent of the new taxes would hit producers that are also struggling under four decade-high inflation and struggling to get goods to market due to a busted supply chain. While proclaiming to be all about "made in America" products, Democrats are now going to punish companies that make goods in America while incentivizing goods from abroad.

It's a gift to China.

Despite the data that shows the legislation to be bad for the American people, Democrats are going all-in regardless of the consequences.

Whether it's because they think Americans will be impressed with President Biden's party's ability to finally pass the president's social spending agenda and ignore the significant pain that it will cause or because Democrats are going for broke and trying to get one more bill through before they're powerless after midterm losses, the Dems have abandoned struggling Americans to pursue their own vision.

But, as Rebecca reported, it seems that Americans have caught on to the Democrats' game and aren't buying their ploy.