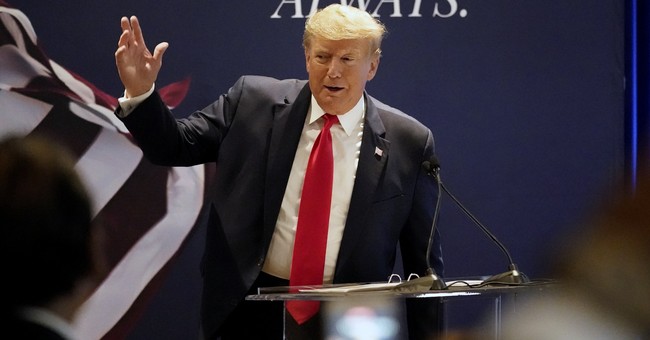 In an interview with Wayne Allyn Root on Monday, former President Donald Trump shared more of his thoughts about the House Select Committee investigating the events of January 6, and he said that Republicans' decision to not participate was a "foolish" one.

Pelosi, however, rejected Reps. Banks and Jordan. As a result, Leader McCarthy withdrew the other Republicans he'd put forward in protest, and the select committee ended up with its current membership roster. That move, according to Trump, was a "bad decision."

"We have some great warriors," Trump told Root. "Jim Jordan — the whole group — Jim Banks, we have some very good people that you know fight very, very hard. Unfortunately, a bad decision was made, this committee was a bad decision not to have representation on that committee," he added. "That was a very, very foolish decision because you know, they try and pretend like they're legit, and only when you get into the inner workings you say, 'what kind of a thing is this?' Just a one-sided witch hunt," Trump reiterated.

Then, in a bit of an awkward moment, Root apparently conflated Trump's endorsement of Leader McCarthy's congressional reelection bid with an endorsement of what is seen as an almost-certain McCarthy bid for Speaker of the House after November's midterms.

"No I haven't, no, no, no I haven't," Trump pushed back when Root said the former president had endorsed McCarthy for Speaker of the House. "No, I endorsed him in his race but I haven't endorsed anybody for Speaker."

In his congressional race endorsement, Trump called McCarthy a "tireless advocate for the people of Bakersfield and the Central Valley" who is "working incredibly hard to Stop Inflation, Deliver Water Solutions, and Hold Joe Biden and Nancy Pelosi Accountable for their catastrophic failures and dereliction of duty."

The full video of Root's interview with President Trump can be viewed below: