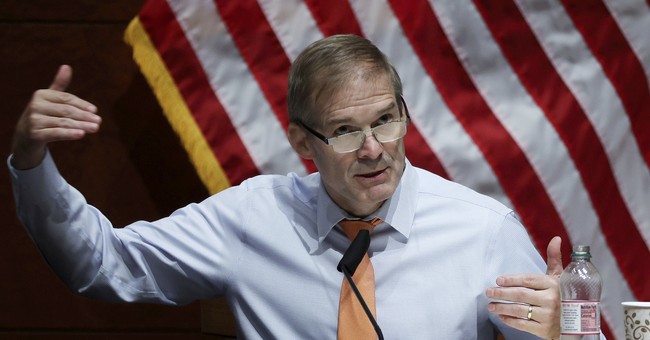 House Speaker Nancy Pelosi (D-CA) announced on Wednesday that she is kicking Reps. Jim Jordan (R-OH) and Jim Banks (R-IN) off of the January 6 select committee. The pair of lawmakers were two of the five members selected by House GOP Leader Kevin McCarthy (R-CA) to serve on the committee with Pelosi’s picks.

Pelosi said that Jordan’s and Banks’ presence on the committee would compromise the “integrity” of the investigation.

“We need a comprehensive investigation as to who organized this attack, who paid for it, how they nearly succeeded in overthrowing a presidential election, why they did it and how we must organize ourselves to prevent anything like it from ever happening again,” Pelosi said in a release. “Monday evening, the Minority Leader recommended 5 Members to serve on the Select Committee.  I have spoken with him this morning about the objections raised about Representatives Jim Banks and Jim Jordan and the impact their appointments may have on the integrity of the investigation...With respect for the integrity of the investigation, with an insistence on the truth and with concern about statements made and actions taken by these Members, I must reject the recommendations of Representatives Banks and Jordan to the Select Committee.”

NEWS: @GOPLeader will pull all Republican members from the Jan. 6 committee in response to @SpeakerPelosi vetoing the appointment of @RepJimBanks and @Jim_Jordan

“Unless Speaker Pelosi reverses course and seats all five Republican nominees, Republicans will not be party to their sham process and will instead pursue our own investigation of the facts.”

B) McCarthy: Denying the voices of members who have served in the military and law enforcement, as well as leaders of standing committees, has made it undeniable that this panel has lost all legitimacy and credibility and shows the Speaker is more interested in playing politics

C) McCarthy: Unless Speaker Pelosi reverses course and seats all five Republican nominees, Republicans will not be party to their sham process and will instead pursue our own investigation of the facts.