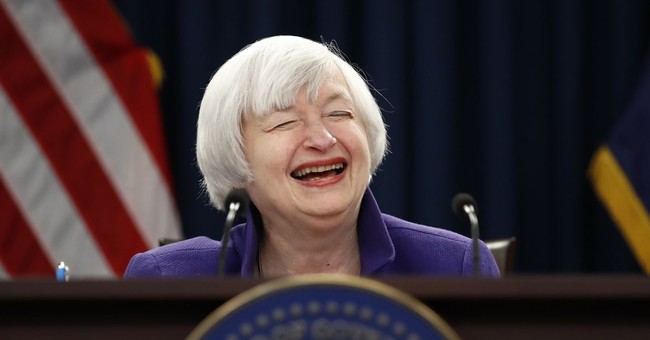 Nearly one year ago, on June 8, 2021, Commissioner of Internal Revenue Charles Rettig — the man in charge of the IRS — confirmed the existence of an investigation into the source of, or events surrounding, the release of a trove of non-public IRS data on American taxpayers.

The data breach was revealed in a series of reports published by ProPublica that the organization calls "The Secret IRS Files." Beyond just tax returns, ProPublica describes the information it came to possess as "a vast amount of information" including "things like records of stock trades" and other "information that is sent to the IRS about financial activities."

ProPublica has used this information for its politically motivated hit pieces against wealthy individuals typically maligned by Democrats for being too successful, or something. Among their targets: Peter Thiel, a successful entrepreneur who supports a number of conservative and Republican causes, including former President Donald Trump.

According to ProPublica, their reporting "focused on how the ultrawealthy use legal stratagems not available to average Americans to avoid paying what many regard as their fair share of taxes" and "have inspired calls for reform in Congress and ignited a national discussion around tax fairness and wealth inequality."

So, ProPublica has been using private IRS information — that was received as a result of hacking, theft, or leaking — to do reporting that supports the general Democrat talking point coming from the White House and congressional leadership. President Joe Biden, so far, doesn't seem to be worried about how the private information made its way outside of the IRS or how it ended up in the hands of the Democrat sympathizers at ProPublica. Neither do the Biden administration officials in charge of the IRS and the private data at issue that's been used to call for higher tax burdens for successful Americans.

Almost one year since the investigation was confirmed by IRS chief Rettig, there has been basically zero movement or apparent interest in figuring out how all the private tax information made its way from the IRS and eventually into the hands of the writers at ProPublica.

The confirmation of an investigation into the matter, or at least a public statement that there was an investigation, has been followed by more confusing and dubious public statements that have been devoid of any actual information that would lead the American people to believe the IRS or Biden administration are taking the breach seriously. If anything, statements from our supposed federal know-betters have only revealed how little they know, or want Americans to believe they know. The folks at Americans for Tax Reform put everything that's been said by Rettig and Treasury Secretary Janet Yellen into a montage of know-nothing pablum, and here's what the officials had to say.

Shortly after the investigation was confirmed, Janet Yellen said on June 16, "I really want to emphasize we do not know what happened." A few days later on June 23, she said "We don’t yet know what occurred." Then, by September, her talking points had evolved to be, "we do not know that the ProPublica information came from the IRS," a convenient blame-evading addition. In November, Yellen said more of the same: "We don’t know what the source of the leak of that information was."

Not exactly confidence-inspiring remarks from someone who should be finding out how private IRS data ended up publicly reported and how to prevent such breaches from happening in the future.

By April of this year, Rettig was again seeking to push the spotlight of scrutiny in another direction, saying he did not believe "it’s been indicated that [the data] was actually stolen from the IRS." The head of the IRS lamented that he gets "frustrated when investigations go on without public acknowledgement of what’s there. You know the timing isn’t helpful for maybe an agency to say what did or didn’t happen," he added. "I don’t believe there has been a public statement that it actually was a leak or a breach from the Internal Revenue Service where that data came from," Rettig also said last month. The situation only becomes more alarming if, as the IRS' chief posited, the IRS data did not come from the IRS and instead was obtained by an outside party. Are all Americans' private tax and reported financial information susceptible to such an outside breach? At this point, the IRS' best hope might be to sacrifice a low-level career data analyst who had access to the info and a political axe to grind — any alternative is far more damning and would only further erode what, if anything, remains of the IRS' public image.

Then this month, while testifying before Congress, Yellen said "I really am anxious to see some results here as well," speaking of the investigation into the data breach, adding "I regret that I’m not able to do so."

What? Why isn't the Secretary of the Treasury able to see results from an investigation happening under her nose? Why isn't there any information yet available nearly one year into the supposedly ongoing inquiry? Does the IRS or Treasury even know exactly what information made its way outside of the IRS by will or by force? Do they have anything to back up their suggestions that the data didn't come from their own bureaucracy?

It's a classic big-government slow-walking of something that requires the appearance of action but instead serves the political interests of the powers that be. You can bet your bottom dollar that, if a conservative publisher had obtained private tax information and used it to construct a narrative against prominent Democrats, Yellen, Rettig, and the rest of the Biden administration would be apoplectic working to find and punish the source of the breach. But, as with the IRS scandal from the Obama years, these supposed mistakes and accidents only seem to happen in a way that benefits Democrats and penalizes Republicans. Perhaps the apparent investigation-in-name-only talked about by Rettig and Yellen ought to be added to the GOP's growing list of items to investigate with their expected return to power in Congress after November's midterms.