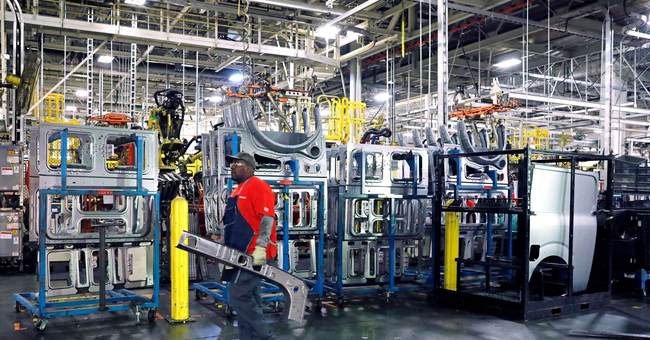 Matching Wednesday's Consumer Price Index increase that surpassed consensus estimates, the Producer Price Index release on Thursday saw the inflation metric upstream from consumers jump 0.5 percent since March's reading for an 11 percent year-over-year increase that surged past expectations. It's more bad news for the Biden administration and Democrats who have been hoping for some relief from inflationary pain that's seen approval for Democrats' handling of the economy plummet.

Prices at the wholesale level accelerated further in April, part of a broader inflation problem persisting through the U.S. economy, the Bureau of Labor Statistics reported Thursday.

The producer price index, which tracks how much manufacturers get for products at their initial sale, rose 0.5% on the month and 11% from a year ago, a decrease from the record 11.5% in March.

As U.S. Senator Marco Rubio pointed out of the news, not only are American consumers now facing inflation pain that hasn't been seen since the early 1980s under President Biden's economic policies, it's also increasingly unaffordable for companies to make things in the United States.

JUST IN: We just set a new record on the costs paid by American industries that make products

The Producer Price Index it is up 11% over last year and .5% over last month

As Americans struggle to make ends meet while experiencing a decrease in real wages — around three percent in recent months — the lasting increases for producer costs means that end consumers are not likely to see relief when it comes to inflation for a while longer.

Republican National Committee Chairwoman Ronna McDaniel noted that "[p]rices continue to soar for everything from gas to groceries" and "Americans are exhausted and struggling to stay afloat in the wake of Biden’s failed agenda. He has neither answers nor solutions – his policies only worsen the crisis facing families, yet he does not care," she added of April's PPI release that came close to hitting it's all-time high set earlier in Biden's tenure.

And with the national average for gas prices setting multiple all-time highs in recent days — $4.418 per gallon of unleaded as of Thursday — May's Consumer Price Index is all but guaranteed to jump again when that report is released in early June.