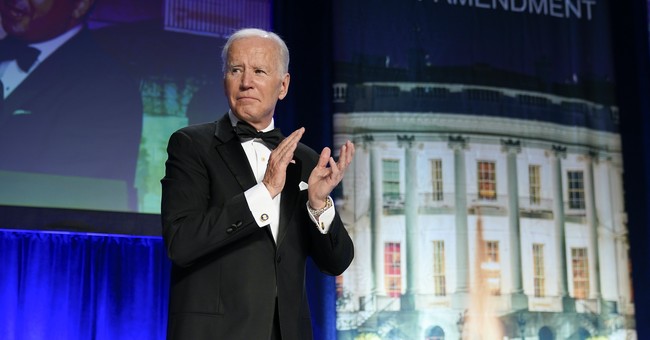 The national average for a gallon of diesel fuel reached it's all-time high on Monday according to the latest data from AAA that also showed unleaded gas is nearly tied with its record-high price reached earlier this spring.

Remember when President Biden said he was working on lowing the price of gas in order to help alleviate the inflation pain Americans have been facing since he took office? The White House heralded the "historic" decision to release a never-before-seen amount of oil from the nation's strategic reserves and looked for back-pats from the usual mainstream media lapdogs for Biden's supposedly quick action to help Americans.

Here's what the White House said on April 21:

Together, these releases will put more than one million barrels per day on the market over the next six months, and will help address supply disruptions caused by Putin’s further invasion of Ukraine and the Price Hike that Americans are facing at the pump.

Second, roughly one month since Biden announced he'd be dipping into the Strategic Petroleum Reserve in a move he said would lower gas prices for Americans, the national average for a gallon of gas is $4.328, just $0.003 below the all-time record high of $4.331 set on March 11. The current average for regular unleaded as of Monday is thirteen cents higher than gas was one week ago, twenty cents more expensive than one month ago, and $1.36 more than one year ago.

So...what exactly did the Biden administration accomplish? We're back where we started — and even worse off for diesel — but we have a significantly smaller quantity of oil in America's strategic reserves than before.

As Biden's critics and most energy experts who aren't blinded by partisan hackery would explain, Biden's quick "actions" were never going to get oil and gas prices down for more than a few weeks. They could have been paired with real action — like approving U.S. pipeline projects, allowing more drilling leases, and incentivizing domestic energy production — to make a quick impact before the lasting benefits of energy independence would kick in. But Biden didn't do that.

Instead, Biden tried to get a quick round of positive coverage in order to tout his supposed commitment to helping Americans and buoy his underwater approval ratings, but didn't take the needed action to drive down oil and gas prices. It's just another example of how the Biden administration is focused on ending fossil fuels — a goal Biden himself stated previously — and forcing a "transition," as Energy Secretary Granholm has called the radical plan to wipe out American energy.