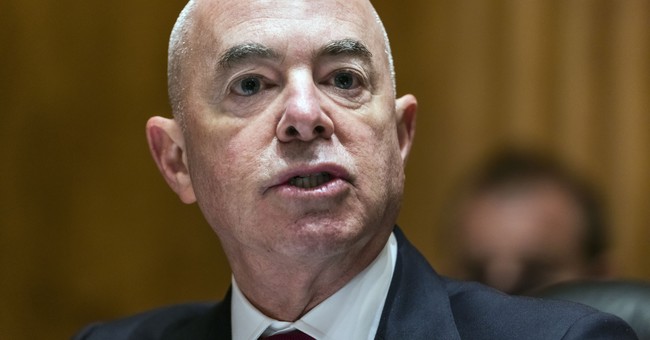 In addition to disastrous testimony about Biden's border crisis, Department of Homeland Security Secretary Alejandro Mayorkas also proved unable to provide a number of cases or cite a single instance of white supremacy or domestic terrorism his agency referred to the Department of Justice — despite identifying such as the greatest threat to the homeland.

While the U.S.-Mexico border remains wide open with disastrous results for border communities and states throughout the country — including instances where individuals listed in the U.S. terrorist database were apprehended after illegally crossing the border — Mayorkas maintains domestic terrorism poses the greatest threat to the United States.

"The greatest terrorism-related threat that we face in the homeland is the threat of domestic violent extremism," Mayorkas said earlier in April. "The most prominent threat is the threat of White supremacists," he explained.

"Do you not have the number?" Steube questioned as Mayorkas faltered. "You just clarified — domestic terrorism is a threat to the homeland, number one threat — and I'm asking you how many referrals from Homeland Security have you made to DOJ for white supremacy or domestic terrorism?" Steube pressed.

"I will provide you with that information..." Mayorkas trailed off trying to avoid answering Steube's direct question.

"So you don't know?" Steube asked again. "I do not have..." came Mayorkas' response before Steube asked whether the DHS secretary could "name one case?"

"I will provide the data to you" was again all that the man in charge of keeping America safe could say.

"So you can't name one case," reinforced Steube, "yet according to a new report from the U.S. Department of Justice, almost half of all the criminals prosecuted in federal courts in 2018 were aliens charged with crimes — ranging from drug trafficking to murder and to kidnapping — and a vast majority — 38,000 — were illegal immigrants, illegal aliens. But it's still, domestic terrorism is the number one cause of your concerns," he noted.

Despite claiming domestic terrorism is the #1 threat to the homeland, @SecMayorkas can’t name a single case that he referred from DHS to DOJ for white supremacy or domestic terrorism. pic.twitter.com/9ZtYp1A3eo