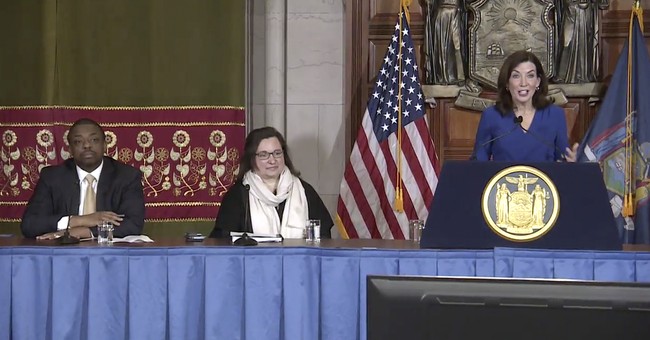 Source: Office of the Governor of New York via AP

If you thought the departure of disgraced ex-governor Andrew Cuomo would usher in something of a respite from corruption in New York's executive leadership, you were wrong. On Tuesday morning, now-former Lieutenant Governor Brian Benjamin surrendered himself to authorities after which he resigned his post in Gov. Kathy Hochul's administration less than one year after being appointed as her second-in-command.

U.S. Attorney for the Southern District of New York Damian Williams characterized the charges against Benjamin — including  bribery, honest services wire fraud, and conspiracy to commit those offenses — as "a simple story of corruption."

The DOJ said the government's case alleges that Benjamin used "his official authority while a New York state senator to direct a state-funded grant to an organization controlled by a real estate developer in exchange for campaign contributions." In addition, he faces "two counts of falsifying records in connection with the preparation of contribution forms that falsely reported certain contributions" as being made by other individuals and false statements he "made in a questionnaire he submitted while seeking to become Lieutenant Governor."

This opening line can be used to describe many… https://t.co/rSIrh4pwYM

Governor Kathy Hochul — after replacing Gov. Cuomo — appointed Benjamin as her second-in-command last August after promising New Yorkers that the previous improprieties in the governor's office would be no more and the state's residents could trust their new executive leadership. On Tuesday, Hochul accepted Benjamin's resignation and said "it is clear to both of us that he cannot continue to serve as Lieutenant Governor."

As the U.S. Attorney's office case overview explains, Benjamin's alleged conspiracy and subsequent coverup ran from 2019 to 2021 and included the vetting process he underwent before becoming Hochul's lieutenant governor:

On or about August 17, 2021, while being considered to be the next Lieutenant Governor of the State of New York, BENJAMIN submitted responses to an executive appointment questionnaire that contained questions addressing, among other things, BENJAMIN’s relationship with political contributors. Despite BENJAMIN’s efforts to procure $50,000 for Organization-1 and his solicitation of contributions from CC-1, BENJAMIN falsely stated, among other things, that he had never “directly exercised [his] governmental authority (either as a Legislator or Executive official) concerning a matter of a donor [he] directly solicited.”

Should Benjamin, 45, end up convicted on all counts, he faces up to 75 years — but it's unlikely he'd end up serving the maximum sentence.