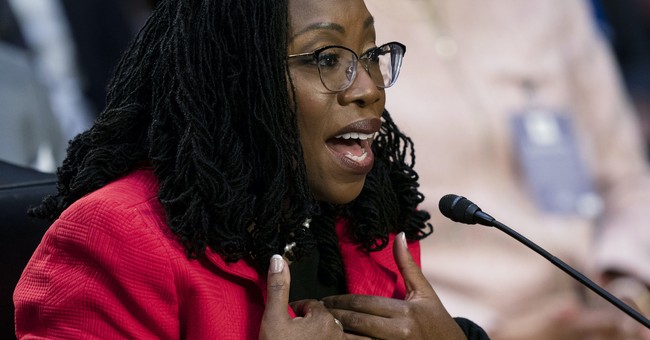 On Tuesday afternoon, Senator Ted Cruz (R-TX) raised some writings and statements from Biden's SCOTUS nominee that showed Judge Jackson's support for woke ideologies including Critical Race Theory. Rather than admitting those writings are indeed her beliefs and show what sort of justice she would be, she repeatedly attempted to distance herself from Critical Race Theory, some of its key tenets, and its leading proponents.

As Townhall covered earlier, Judge Jackson invoked critical race theory and social justice in past remarks about sentencing and the "progressive" education offered at Georgetown Day School where she is a trustee.

"I've never studied Critical Race Theory, and I've never used it, it doesn't come up in the work that I do as a judge," Jackson claimed in Tuesday's hearing.

But Cruz had the receipts, including Jackson's own words: "I also try to convince my students that sentencing is just plain interesting on an intellectual level, in part because it melds together myriad types of law—criminal law, of course, but also administrative law, constitutional law, critical race theory, negotiations, and to some extent, even contracts," Jackson said previously.

Ketanji Brown Jackson says Critical Race Theory “doesn’t come up in the work that I do as a judge.”

Senator @tedcruz then reads a quote from her saying that Critical Race Theory is part of her work as judge. pic.twitter.com/MKtNjGeZw6

But Cruz wasn't done. Jackson had also characterized Critical Race Theory as merely an academic theory taught in law school. But, as Cruz noted, the Georgetown Day School at which Jackson is a trustee has a curriculum "filled and overflowing with Critical Race Theory," including books that declare "babies are racist." How many babies do you know in law school?

Despite Cruz's presentation of a handful of books taught at Georgetown Day School that cover or invoke Critical Race Theory, Judge Jackson still claimed she didn't know whether CRT is taught there.

Judge Jackson said that she did not believe that critical race theory was taught in schools.

When @tedcruz points out that the school that she serves on the board of indeed teaches critical race theory, she quickly amends her position to be only about *PUBLIC* schools. pic.twitter.com/R80rcxpruV

After realizing Cruz had done his homework and there was no way to back out of the corner, she changed her tune and pivoted to claim her answers were based on a misunderstanding of Cruz's questions.

For Judge Jackson, who's become something of a hero to the left since Biden announced her as his nominee to replace retiring Justice Breyer, her sudden disavowal of Critical Race Theory and its tenets is notable. As is her expressed ignorance of the theory's creators and key proponents today, as Chris Rufo pointed out:

Ketanji Brown Jackson says she doesn't know if her private school teaches critical race theory—even though Cruz pointed out that it uses "Critical Race Theory: An Introduction" as a key teaching material.

Ketanji Brown Jackson disavows a core tenet of critical race pedagogy: "I do not believe that any child should be made to feel as though they are racist [or] they are oppressors."

Judge Jackson denies all knowledge of the work of Ibram Kendi. ??

Ketanji Brown Jackson is running away from critical race theory as fast as she can.

Fact or Fiction: January 6 Mob Was Armed to the Teeth and Had AR-15 Rifles
Townhall
Dana Loesch and Mary Katharine Ham go *there* in response to Jane Fonda's latest on guns and abortion
Twitchy
Liz Cheney, Never Trump Go Belly-up While Defending the Hutchinson Testimony
Redstate
Wow, They Really Want to Do This? Delusional Democrats Advance 'Transgender Bill of Rights'
PJ Media