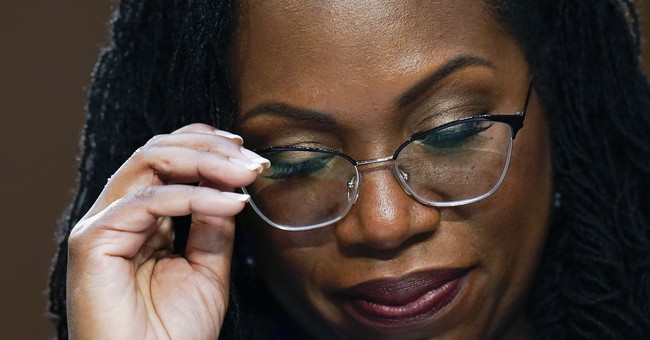 Judge Ketanji Brown Jackson, currently testifying before the Senate Judiciary Committee as her nomination to the Supreme Court is considered, has a track record not too dissimilar from any other woke academic. And despite the Democrat spin that says criticisms of Biden's SCOTUS nominee to replace retiring Justice Stephen Breyer are trumped up claims based on sexist racist bigotry, KBJ's own words in her Senate Judiciary Questionnaire (SJQ) make her beliefs clear.

In one document included in the SJQ, remarks titled "Fairness in Federal Sentencing: An Examination" lay out what Judge Jackson believes and has sought to impart (emphasis added):

I also try to convince my students that sentencing is just plain interesting on an intellectual level, in part because it melds together myriad types of law—criminal law, of course, but also administrative law, constitutional law, critical race theory, negotiations, and to some extent, even contracts. And if that's not enough to prove to them that sentencing is a subject worth studying, I point out that sentencing policy implicates and intersects with various other intellectual disciplines as well, including philosophy, psychology, history, statistics, economics, and politics.

So Judge Jackson, who has previously served on the U.S. Sentencing Commission and then as a judge handing down sentences herself, believes that the radical left's construction of "critical race theory" is to be melded with the actual law and U.S. Constitution in order to determine sentences. KBJ's woke streak doesn't end there, though.

As Judge Jackson also says in her SJQ materials, as seen in an edition of Georgetown Days Magazine after KBJ joined the board of the Georgetown Day School (again, emphasis added):

Since becoming a part of the GDS community seven years ago, Patrick and I have witnessed the transformative power of a rigorous progressive education that is dedicated to fostering critical thinking, independence, and social justice.

And just what does the Georgetown Day School's "progressive education" and dedication to "social justice" look like in practice? Well according to the GDS website — during the time KBJ was a board member — it means events like the "Transgender Day of Visibility" that urged students to "Use your voice, your platform, and your network to communicate your support for transgender rights, the trans community, and transgender people, particularly trans youth and Black trans women, who are most often and egregiously targeted."

It makes sense that Judge Jackson, who wants to combine critical race theory with established law would also favor "progressive education" that's rife with theories constituting "social justice." Like many other activists on the left, their ideal future is one where social justice warriors rely on concocted theories from leftist ideologues to supplant the U.S. Constitution to determine what's right and wrong.

Judge Jackson's embrace of woke ideology can be further seen in another set of prepared remarks for a Harvard Alumni Association Unity Webinar KBJ moderated in the fall of 2021. In a section headed "Diversity, Equity, Inclusion & Belonging" — another buzzphrase used by leftist activists — Judge Jackson uses a litany of woke language including "Latinx."

She continues with a question on "another exigency" she sees in "environmental justice and the impacts of the climate crisis on communities of color."

Just these few examples from the information Judge Jackson turned over to the Senate illustrate what happens when woke leftist ideology goes from being merely a theory talked about in campus listening sessions and faculty lounges to be embraced by someone who attains power within the U.S. government. Without much explanation as to her judicial philosophy offered so far in her confirmation hearings, sentiments like these are the only ones senators and Americans have to go by when judging what kind of justice KBJ would be.