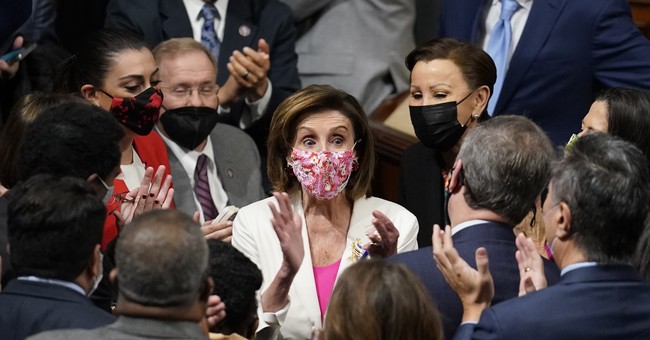 In a conveniently timed update to guidance for the U.S. House of Representatives, the Capitol physician announced Sunday that the mask mandate requiring masks on the House floor would be lifted — just ahead of President Biden's first State of the Union address on Tuesday.

According to Attending Physician Brian Monahan, the previously issued requirements to be in effect for Biden's address to Congress "remain in force with the exception that KN95 or N95 mask wear is no longer required and mask wear is now an individual choice option."

As Townhall covered previously, the Capitol physician's earlier February 17th rules for the State of the union included requirements for masking, social distancing, a negative COVID test, and avoiding physical contact with others. Those initial guidelines included a threat that "failure to follow guidelines or removal of the mask in the House Chamber will result in the attendee's removal from the event and/or fines."

Rep. Thomas Massie (R-KY) reacted to the news of changing science by poking at Democrats who are now trying to catch up with guidelines issued long ago under Republican governors. "Follow the political theater!" he tweeted. "House mask mandate suspended just in time for State of the Union."

The optics for President Biden's first State of the Union address were already less than ideal as United States Capitol Police reinstalled fencing to ring the Capitol Building in which Biden will speak. The mask mandate that was issued under threat of removal or fine for attendees — and the fact that Congress had distributed masks stamped with "MADE IN CHINA" were just two more obstacles to Biden's ability to project any image of moving beyond the COVID-19 pandemic.

The updated guidance comes after President Biden's polling firm told Democrats that if they want to stem their hemorrhaging support ahead of the midterm elections, they need to declare a "win" over COVID and move on.

Here is the literal memo to the Dems from Biden's polling firm. Declare a win over Covid and move on. I suspect CDC will get the memo. Will @GavinNewsom and @lapublichealth? We shall see. SOTU is Tuesday. pic.twitter.com/1Enk5SIITk

For President Biden, House Speaker Nancy Pelosi, and Democrat officials across the country — a group that has claimed the mantle of "following the science" — this seems to be yet another case of science following the politics and not the first such instance in recent days.

Interesting timing for CDC to announce eliminating their masking & distancing orders for children & the “vast majority” of Americans— a new war, hrs after a Supreme Court pick is named, late on a Friday afternoon, and 2 business days before a SOTU speech?? https://t.co/Qt6oJqTzLf

The question now becomes whether Democrats in Congress will be able to peel their masks from their face during the State of the Union. As Fox News' Tammy Bruce pointed out of Democrats' rush to lift draconian measures ahead of the address, "Biden's SOTU continues to cure COVID!"